local, news 7:02 PM
A+ A-
Print Email
Mayor of Lamitan City, Basilan, Hon. Rosita "Rose" Furigay, was shot to death in Ateneo de Manila. This is when Mayor Furigay attended his child's graduation ceremony. Shooter known as physician Chao Tiao Yumol said that the love for the country made him kill the mayor. 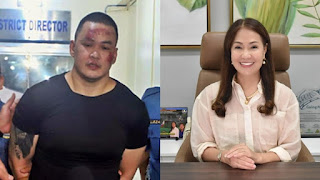 Dr. Yumol said that the Furigay are involved in illegal transactions such as illegal drugs in their city. Yumol is a huge critic of the politician's family.
Reports said that the heat went up when then-mayor Furigay had Yumol's clinic closed down under then-health minister Saffrullah Dipatuan of thr BARMM (Bangsamoro Autonomous Region in Muslim Mindanao).
It said to be closed due to Yumol's clinic does not have a license to operate from BARMM --- Brgy. Maligaya, Lamitan City.
The closure was issued by the ministry last April 5th of 2019.
BARMM health ministry deputy cluster head, Dr. Shalmalynne Ampatuan, ordered Yumol to cease the clinic's operation or take the risk of getting sued and be shut down with the government of Lamitan City's help. After 2 months, the minister then wrote a letter to Furigay that Yumol's clinic was no longer operating.
It said on June 24 of 2019, BARMM health ministry Dipatuan sent a letter to Furigay that they sent Yumol a notice and gave a limit of one month to comply and get a license to operate, but Yumol did not comply. Then-mayor Furigay to BARMM health ministry to issue another order of cease-and-desist to be served immediately. The story said the situation didn't do good to Yumol which made him a huge critic of Lamitan City's mayor Furigay. Yumol made an accusation about Furigay being involved in illegal drugs business. He has been publicly accusing the Furigay, and even on social media.
When the incident happened, Yumol owned it telling that he loves the country that is why he did the killing. He has been followed to be killed too several times by his enemies.
He made a talk that his visibility as a critic with information about the illegal business made him a target of the situation. He just ended Mayor Rose Furigay's life to protect Basilan and the people there.
There's not clear information if the accusation is true. The other camp is also being defended that Yumol did the crime because his clinic was shut down, but Yumol stated that it is because he is a living information about his accusation to Furigay about the illegal activities and that is why he was given the misery.
Share to: