Lucile Randon is 118 years old as of writing, and the verified oldest living person in the world.

Randon is a Catholic nun residing in France. She was born in February 11, 1904. After the death of Francisca Celsa delos Santos of Brazil on the 5th of October 2021, Randon was the one and only verified person born in 1904 left in the world. She is also the oldest person confirmed to survive COVID-19. 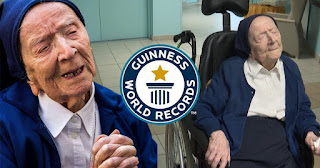 images from: My Modern Met

Retired at the age of 75, and residing in a nursing home in Toulon, France, Randon was a governess worker, a teacher and missionary, and converted to Catholicism at her young adult years.

She grew up as a protestant and her grandfather is even a pastor. In 1923, she was baptized as Catholic --- she was 19 years old that time. In 1944, she then joined the Catholic order "Daughters of Charity", taking "Sister André" as her name, in honor of her elder brother. Going to a hospital in Vichy, serving orphans and elders, was her mission after the World War II ended. For 18 years she served there, until she was moved to another hospital La Baume-d'Hostun, Drôme (1963) for night duty.

During Covid-19 outbreaks, Randon was one of the 81 out of 88 residents infected with the virus. She was asymptomatic and tested negative a few days before her 117th birthday. That's the reason why she was the confirmed oldest person survivor of the virus.

The 118-year old nun received a birthday note from France President, Emmanuel Macron on her recent birthday. On the 19th of April 2022, after the death of Kane Tanaka, she became the oldest verified living person in the whole world.

Randon said she felt it was a sad honour, since she would be better off in heaven as of the moment. However she also expressed great feeling about being taken cared well by her family.