How scary is the trending horror Netflix movie Incantation?

Another trending horror movie launched in the Philippines' Netflix, Incantation.

Incantation movie is about a mother protecting her child from a curse.

The setup is a YouTuber/Vlogger scene where most of the scenes were captured by the camera held by the characters. 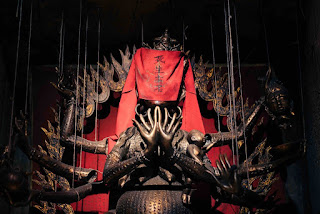 Their main goal is to enter the prohibited tunnel in order for them to get more subscribers, more views, and more money.

In the village, they pray and chant the spell, "Hou-ho-xiu-yi, si-sei-wu-ma", and they have said that this is a way to protect the village from the curse surrounding them.

This chant is also used by the mother to protect her child from the curse.

The difference of Incantation to other horror movies is it engages the viewers. Most of the scenes especially on the grand parts, viewers of the movie, yes, you as a movie-watcher, could participate in the situation the woman is undergoing.

The woman will discover different keys to protect her daughter, and she will be asking your help to solidify the power to defeat the curse.

First of all, it's terrifying. The Incantation succeed in feeding the viewers with fear. The only bad thing about the movie is it adapts the "chain mail" idea. Chain mail, remember when you were young, there are curse that you need to... oh okay, I don't want to spoil you about the movie. Watch it for you to experience what I have experienced.

But just in case you have an anxiety, not really into horror movies, or easy to believe human, I will not invite you to watch Incantation.

There are also talks about the Netflix's movie Incantation. They say that it is based on true events, but there's no evidence of those words to prove the authenticity of those scenarios shown in the movie.