Who among the final 5 will win Survivor 41?

Survivor 41 is coming to an end next week, who do you think will outlast among the castaways?

The six left castaways went to fight for their lives inside the game. While Ricard doesn't have talks about who's going home, the episode played between the other five castaways to whom they will keep in the game and who they will remove from the six. 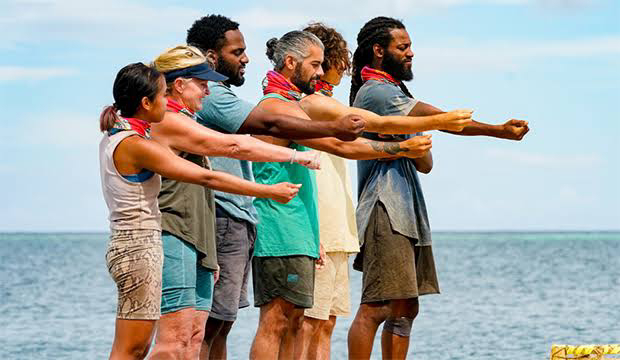 The Survivor 41 talks a lot about the world reality, knowing that this season is the first season to have casts in different races to compete for a million dollars. There are talks about it that DeShawn had opened the previous episode. Xander and Heather showed appreciation to what DeShawn had served on the table during that tribal council where Liana went home.

Despite the heartwarming talks, the game must go on. The six were divided into two groups to play a reward challenge, making DeShawn compete with Erika and Xander as a team. The team of Danny, Heather, and Ricard lost the reward challenge making the gate open for DeShawn to talk about his survival in the game with the two strong contenders --- Erika and Xander.

Erika said she was open to any possibilities of whom to take to the final tribal council and who should go at that episode. Xander had the same idea.

DeShawn was happy to discuss the potential final 3 of having him, Erika, and Xander work until the end. Erika has a feeling of trusting DeShawn because it might be good for her game to keep DeShawn as DeShawn wanted her to be part of his final three visions.

While in the camp, Ricard and Heather left Danny to find some wood for a fire, where Danny got the chance to sneak out to find an immunity idol after Shan departed from the game unable to use her idol. The thing is, Danny went back to camp late since Ricard and Heather were already in the site to make a fire.

As the game moves forward, an individual immunity challenge must be played. They need to spin out of the ring with rope to move to the next stage of the game which is the net. After walking out of the net, they will get a puzzle piece on a narrow bridge, the problem is, they may be dizzy from spinning on the first part of the challenge. After passing the bridge without falling while carrying a puzzle piece, they will then solve a word puzzle. Ricard won the immunity necklace making him safe and the first person on the final 5.

As for the others, Ricard's winning was a bad thing. The majority of the castaways were eyeing removing the big target, Ricard.

Back in camp, Xander asked Heather who could beat Ricard in the end between Danny and DeShawn. Heather responded that DeShawn, because of what DeShawn did on the last tribal council. Same as Erika, she knew DeShawn was a bigger threat than Danny since DeShawn is likable. Since DeShawn opened up an idea of the new final 3, she needs to keep DeShawn for her game.

When Ricard asked Erika who among Danny and DeShawn should go, Erika gave her opinion of wanting Danny out. Due to Ricard's feeling that Danny might have an idol in his pocket, they need to split the vote to flush an idol.

This episode's tribal council went next. During the tribal council, DeShawn has a feeling of the group voting split so they can flush an idol. But before the voting started, he revealed something called a "truth bomb". That incident happened when Jeff asked the two (Danny and DeShawn) for a final paragraph --- if in case they are the ones who will be leaving the game that night. DeShawn revealed that Erika will not take Heather to the final three. He reminisced the time when he talked with Erika back at camp. Ricard raised his hand to say something. He said that it's odd for DeShawn to spill a tea because DeShawn is not yet the confirmed one to leave --- making whatever the discussion DeShawn and Erika have turned off. Erika then replied that its great DeShawn revealed the talk because she has a trust issue with DeShawn, but now she knows DeShawn.

The voting started making a 3-3 vote between Danny and DeShawn, and because of that, they need to re-vote leaving Danny and DeShawn (who can't vote for re-vote) as the two options for vote off. In the end, Danny went home then Jeff snuffed out his torch.

Next week is the finale. Who do you think will win the entire season? Will it be Ricard who may win another individual immunity challenge to keep him safe and bring his great resume to the table of the Jury? Will it be Xander who played a good game from the beginning, having an idol up to now, and strategic in removing who in the game? Or will it be Erika who played strategically? Will her smart moves and talks make her a winner? Or will it be DeShawn who is very likable and has a good point and talk during tribal councils? Or will it be Heather that now she knew that there are some talks about Erika not bringing her to the final three, will she finally make a big move?

The Survivor 41 will end the season with two immunity challenges, one fire-making challenge, and an announcement of the franchise's latest survivor winner.