1.6 Billion cash gift and assets given to a Filipina Nurse from her boss

lifestyle 6:32 PM
A+ A-
Print Email
A Filipina nurse based in the USA was given a total of Php1.6 Billion worth of cash gifts and assets from her boss.
Gicela Oloroso met the mining magnate Huguette Clark in a hospital in New York, the year 1991.

Image from: Daily Sentry
It was 1972 when Oloroso migrated to America.
Oloroso was born in Sapian, Capiz on May 1950.
She has a Jewish name Hadassah Peri because she was married to an Israeli immigrant, Daniel Peri. They have 3 children.
While Clark was no longer living with her husband which that time was 85, and she has no child.
Oloroso and Clark became best buddies when Oloroso started to take good care of Clark. Oloroso was a primary daytime nurse and caregiver of Clark from 8 in the morning until 8 in the evening, without any rest day.
She said "extreme" was her sacrifice to take care of Ms. Clark.
As she said in an interview on August 29, 2015, she gave her life to her boss ("I give my life to madame").
The salary of Oloroso is awesome as she was earning $131,040 or Php6,637,110.48 a year --- based on the current Exchange Rate.
As written in an article of NBCnews.com on September 12, 2013, Ms. Clark has fear of other people, especially if she doesn't know the person, as per Ms. Clark's doctors and nurses.
Ms. Clark won't also take her medicines if Oloroso was not on her side.
If the Filipina Nurse, Oloroso, can't be with Ms. Clark at a certain time, the other nurse pretended that Oloroso was calling on the phone telling that it is time for Ms. Clark's blood pressure check.
"You have to convince her. You have to explain it to her, you have to educate her who's coming, what is that for, and at times we have some difficulty", Oloroso said in another article. 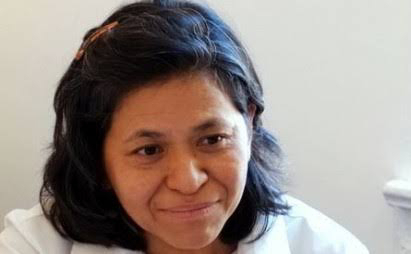 Image from: Popular Manila
And because of Oloroso's sacrifice for her boss, aside from her salary, she received numerous gifts from Ms. Clark.
She received a house and lot in September 1993, and that house worth was $450,000 or Php22,800,375.00 after Oloroso's house experienced a flood, and her children suffered from asthma. In August 1999, Ms. Clark bought another house for her which has a worth of $149,589 or Php7,579,300.66.
Mid-2000, Oloroso's niece who suffered from breast cancer was mended and the expenses were paid by Ms. Clark.
Ms. Clark, again, gave Oloroso another house and lot worth $775,000 or PHP39,267,312.50, to have a shelter for Oloroso's relatives if they visit the nurse in America. From December 2000 to August 2002, 3 realty properties were received by the nurse from Ms. Clark amounting to $2,959,097 or Php149,930,047.25. Aside from that, Oloroso also received trust funds for her kids' education, jewelry, objects d'art, rare musical instruments, and miscellaneous items.
Oloroso, then, received cars, including a Bentley that based on her is giving her a headache. She said, "to tell you the truth, we never enjoy this car. So expensive to repair. You are scared somebody going to steal it". Ms. Clark also paid Oloroso's back taxes when it was audited in 2004, which is worth $300,000 or Php15,200,250.00.
For all the greatness Oloroso received from her boss, Oloroso never left Ms. Clark until her boss' death.
She said, "sometimes I would say: 'You gave me a --- check already today", added, "She would say, 'you have a lot of expense --- you can use it.
“I accepted --- the check because we have a lot of bills", she said. "Madame is very generous, and we don't force her to give us. We don't ask for it".
"That's how she is, very generous, not only me, thousands of people, a lot of people".
"We always talk about our lives, we talk about anything --- you know --- and she always asks my family", she added.
“For almost fourteen years, I stayed more in Madame's room than in my house", she detailed. "I work twelve hours. My husband is a mother-and-father while I’m working with Madame", said Oloroso.
“Family vacation, I miss, when the kids were growing up", she remembered. "Because she never wants me to take off. She is uncomfortable with other people. I gave my life for her", she said.
On May 24, 2011, Ms. Clark passed away and Oloroso was there for her.
On Ms. Clark's last will and testament dated April 2005, she detailed that Oloroso will be receiving $30 million or Php1,520,025,000.00, but the relatives of Ms. Clark contradicted it, asking the court to trash the April 2005 last will and testament. Another last will and testament was found, dated March 2005, stating that the relatives will be receiving the whole inheritance.
On September 24, 2013, the court decided that Oloroso will not receive any inheritance from Ms. Clark. Despite that, whatever Ms. Clark gave was never taken back except for the antique Japanese dolls, and other jewelry which is part of Clark's family heirlooms.
In the middle of the hearing, Oloroso asked that as a nurse, is receiving expensive gifts from a boss ethical? She mentioned that as an independent contractor, and not part of any hospital staff, she can't recall any paper stating that she is prohibited to receive any such gifts.
All in all, Oloroso received reaching $31,906,074.81 or Php1,616,601,045.44 gifts which are a combination of cash and property.
After the case, Oloroso is living a life out of the open world. She served more than 20 years as a nurse to Ms. Clark.
Share to: