local 5:41 PM
A+ A-
Print Email
Vice-President Leni Robredo additionally served lugaw and hot pandesal for evacuees influenced by an unsettled Taal spring of gushing lava at Tuy, Batangas, on Tuesday.
Leni said on her tweet, "we are giving relief goods. We are giving mats and toiletries, and pillow as well. We are also serving 'Leni Lugaw' which is uncommon, and as well 'pandesal'", with a photo holding 'Leni Lugaw' prepared by her staff. 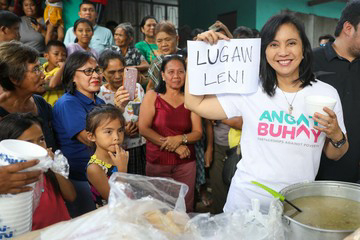 Image from OVP/Charlie Villegas
The VP additionally helped the evacuees remaining at Kaylaway Elementary School, Nasugbu, Batangas. The Office of the Vice President through its Angat Buhay accomplices gave help to the evacuees, including nourishment packs, buckets, cushions, cleanliness units, and water containers, just as hot dinners for lunch and merienda. They likewise led administrations including therapeutic interviews, chuckling yoga, and narrating for youngsters were additionally directed.
Share to: