local, news 6:54 AM
A+ A-
Print Email
President Rodrigo Duterte has marked the ₱3.757-trillion national spending plan yet vetoed arrangements on ₱95.3 billion worth of projects and ventures presented by the House of Representatives after the two chambers endorsed the adaptation affirmed by the bicameral council, Senate President Vicente Sotto III said on Monday. In an instant message from Bangkok, Sotto said Executive Secretary Salvador Medialdea educated him of Duterte's marking of the General Appropriations Act for 2019, or Republic Act No. 11260. 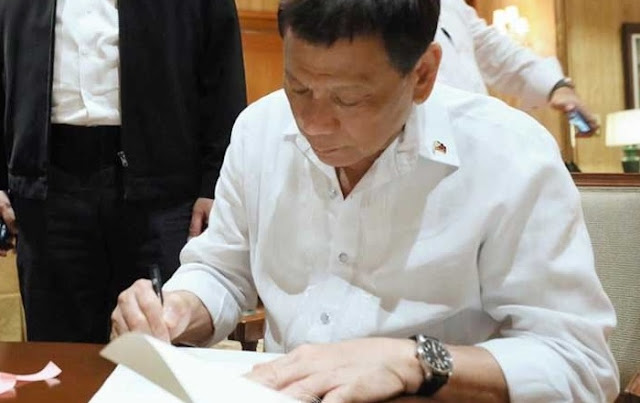 Looked for affirmation, Medialdea affirmed that Duterte marked the national spending plan on Monday. Sotto said no stylized marking had been booked. Medialdea revealed to the news media that the President vetoed ₱95.3-billion in appointments for the Department of Public Works and Highways.

He said the things were vetoed "for being not part of the President's need ventures". Sotto prior recognized the rundown of ₱95.3 billion worth of projects and ventures that the Senate needed expelled from the proposed apportionments, including the ₱75 billion supported from realignments and set under the Local Infrastructure Program of the Department of Public Works and Highways.

He said the realigned cuts originated from: resource protection program, organize improvement program, and extension program, flood the board program and assembly and bolster program. 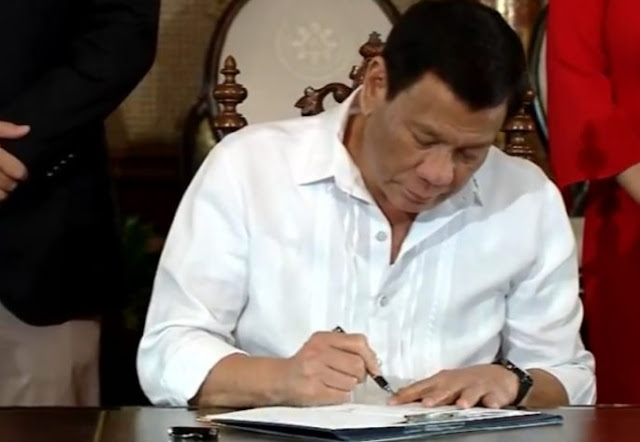 Sotto had said, "the President may wish to think about opposing these illegal realignments, in accordance with his protected capacity to veto specific things in the General Appropriations Bill". The Senate and the House of Representatives have occupied with a tussle over the ₱75 billion sum, which House allocations executive Rolando Andaya Jr. said was not a realignment but rather minor organization of singular amount reserves.

In a last-discard move to make the House proposition adequate to Malacanang, Andaya reported a week ago the consideration of a fourth book in the 2019 General Appropriations Bill. He said, "this is the first occasion when that the General Appropriations Act, when marked into law by the President, is comprised of four volumes of spending books". Andaya said the House initiative has moved for the separation of the financial plan for explicit projects and ventures in consistence with the most recent Supreme Court's choice on the pork barrel issue.

Andaya said, "when the President signs the 2019 General Appropriations Act, the fourth spending book with ordered allotment for projects and ventures will be out in the open".

Duterte's marking of the law put a conclusion to the administration's four-month dependence on a reenacted spending plan that has influenced the execution of a few projects and activities during the current year. Last Thursday, the President took steps to veto the whole spending measure on the off chance that he discovered inconsistencies in it.

Duterte's representative Salvador Panelo clarified the next day that the Office of the President was "practicing most extreme consideration in the survey and assessment" of the spending bill. He said, "as a legal counselor and exacting implementer of the standard of law, the President steps mindfully in playing out his established obligation ensuring that before he inks his mark to the report, the last does not damage our Constitution, just as related statute on the issue". The legislature had been working on a reenacted spending plan since January after the Congress neglected to pass the 2019 General Appropriations Act under the watchful eye of 2018 finished as officials wrangled over supposed peculiar inclusions in the spending bill.
Share to: