11:19 AM
A+ A-
Print Email
After the heartbreaking news of Chokoleit's passing, there is a screenshot circulating around the web showing Pokwang's comment on Chokoleit's Instagram video --- dancing the #SwitchItUpChallenge.

Pokwang is Chokoleit's close friend in showbiz industry. They have been working together and both of them are star magic artists. 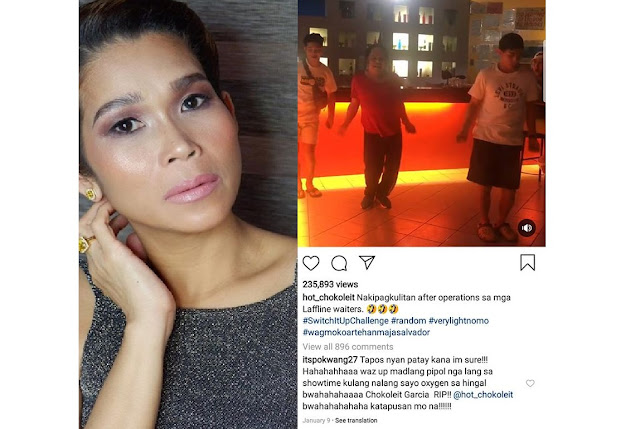 (After that [dance] you're dead I'm sure. [Laugh] even the "what's up madlang people" in Showtime, the only missing is oxygen because you are catching your breath so hard [laugh] Chokoleit Garcia RIP. [Tagged Chokoleit] [laugh] it's your end.)

On the 9th day of March, 2019, Chokoleit passed away after performing in Abra due to heart attack --- having hard time in breathing.

Chokoleit even said to the audience within his performance that 'he should be performing first because if he will be placed last to perform, he might not be able to reach the crowd'. He even added that the stage where he performed was one of the best stages he had performed on.

The 'switch it up' video, Chokoleit danced in red shirt, and on his performance in Abra he was wearing red-colored outfit. The video was posted on the 9th of January where Pokwang joked about Chokoleit's death, and 2 months later on the same number, 9th of March, the comedian, Chokoleit, passed away.

Some people blame the incident to Pokwang due to his 2 months ago comment, while others understand the friendship both of the comedians have.

Pokwang posted recently an image of a 'crying clown painting' with heartbroken emoticons.

Instead of blaming the person, we should know that there is a reason behind the incident and hopefully all of us will just pray for Chokoleit's loving soul.
Share to: