Fumiya shocked to see his father and brothers inside PBB house

Fumiya celebrated his birthday inside the big brother house, aging 24. He wishes to have a birthday cake in the morning, but then surprise to see videos of his brothers --- Yuya and Shuya --- and father --- Akio Sankai --- greeting him a happy brithday on PBB's LED TV. 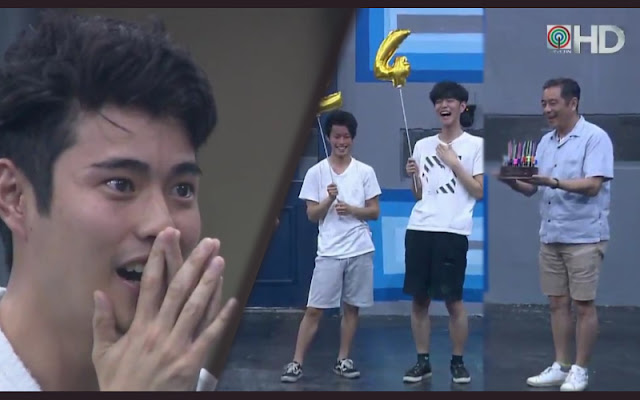 After showing the video greetings, Fumiya was called to express his feelings after watching the warm greeting of his family.

He said that in Japan, they don't normally say 'I love you' to their loved ones, but because of what he has experienced inside PBB's house (and the people around him), he learned a lot. He, as well, mentioned that he lives alone in Japan separated from his family, and the feeling of missing his family existed after starting to live inside the big brother house.

Fumiya did not know that his father and two younger brothers are in the Philippines to meet him inside the famous house, only if the housemates, to be led by his spiritual brother Yamyam, succeed in a ninja challenge.

Time was running until they were able to finish the task successfully. Yamyam then revealed to Fumiya that they are doing it to give the Japanese housemate a great birthday surprise.

Fumiya then saw his two brothers coming out from the closed curtains. He was shocked, he can't believe to see his family inside the PBB house.


Happy birthday Fumi! You deserve all the happiness in this world because you have a pure heart.#PBB8HappyBirthdayFumi pic.twitter.com/6oVDmAi59N

A few minutes, the cake was needed and then Fumiya's father came out holding the birthday cake of his son while greeting happy birthday.

Fumiya really can't believe to see his family, thinking it was probably a dream.

Tomorrow's PBB episode will air the celebration of Fumiya's birthday with the housemates and, of course, the Konichi-Wonder Vlogger ng Japan's family.
Share to: