Last year, Morissette was invited to participate in the same event, one of the huge festivals in Asia, where she sang "Best of my Love" by the Emotions mashed-up with Mariah Carey's "Emotion". 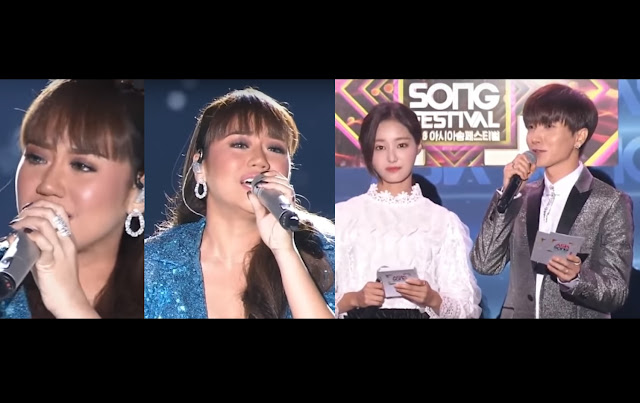 Her second song that time was Little Mix's "Secret Love Song" which was also a hit.

Gunwon Shin of the Asia Song Festival 2018 said that "she was collectively picked again by the board of trustees after her execution a year ago became a web sensation worldwide and accumulated the most number of 'likes' on the famous Korean web based 'streaming' webpage V-Live".

Her first song in this year was an upbeat song which is, as well, her own song, entitled "Throwback". After her first performance, Morissette mentioned that the 2nd song that she will be singing for the audience was a recommendation from her Korean friend who's based in the Philippines.

The title of the song is "Resignation" originally sung by Lee Young-Hyeon of Big Mama.

With emotions and Morissette's own flavor, she managed to perform the song very well. The audience's response was very warm. Especially when she hit the climax of the song and arriving at an emotional ending.

Video source: YouTube/Voices In My Head

Morissette was still able to give the best she could offer to the crowd, as much as she did the last time or even more than the last time. The audience was so appreciative with her performances, and her 2nd song choice made everyone cheering and clapping.

The Asia's Phoenix won her "Female Concert Performer of the Year" award at the 2018 Star Awards for Music for "Morissette is Made", her sold-out show at the Araneta Coliseum, Cebu, Davao and Dubai, UAE.
Share to: