entertainment 7:40 PM
A+ A-
Print Email
About 40 years in showbiz world, the Master Showman, German Moreno, was honored by GMA 7 by naming a studio in their building after the name of Kuya Germs.

The German Moreno Studio was initiated on Thursday. The new GMA studio was divulged on the veteran star-manufacturer's 85th birthday celebration, amid an occasion facilitated by Kapuso on-screen character Jackie Lou Blanco. 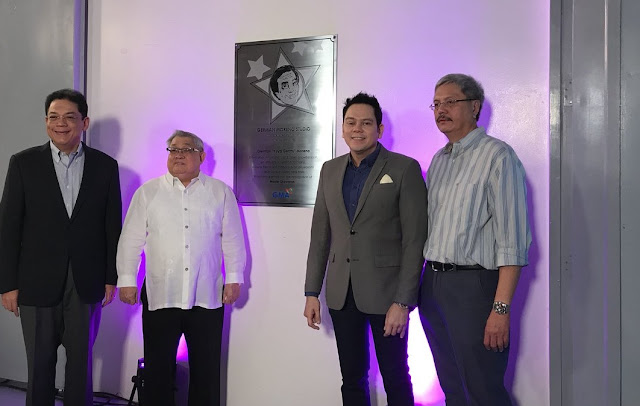 Kuya Germs' child, Federico, said "it's really his birthday today so this is a significant befitting honor for such an extremely extraordinary individual, such a kind individual, such a dependable individual". Federico reviewed the Master Showman's indefatigable commitment to his enthusiasm for media outlets, particularly in the realm of TV.

He included "we've all discussed dependability yet for me the most noteworthy piece of his life or what he's given to GMA and to the business is true blue love. It's truly love". Federico additionally offered thanks to GMA Network for the respect it gave on his darling dad, saying that the more seasoned Moreno was very much adored by his associates.

He said that 'he's certain the master showman is here, that he [Kuya Germs] extremely upbeat in light of the fact that in his most out of this world fantasies he could never expect this since he never expected anything back'.

"I was an observer and my family was an observer to the amount you adore him". GMA Network Chairman and Chief Executive Officer Attorney Felipe L. Gozon underscored that the dispatch of the studio was an approach to remind the general population about the great characteristics of Moreno as he commended the late TV host's reliability and devotion toward his calling.

Gozon said "this could be a suggestion to everyone, these great characteristics will be imitated. This is extremely fitting for German Moreno to be named... this studio for him. Walang kapantay ang faithfulness at commitment ni Kuya Germs". Likewise in participation amid the occasion were President and Chief Operating Officer Gilberto R. Duavit Jr., Executive Vice President and Chief Financial Officer Felipe S. Yalong, and Senior Vice President for Entertainment Lilybeth G. Rasonable. Performing artists Gloria Romero, Sheryl Cruz, Jestoni Alarcon, Sanya Lopez, Jake Vargas, Jak Roberto and Tina Paner likewise graced the initiation of the studio.
Share to: