local, news 8:24 AM
A+ A-
Print Email
On Saturday, House Speaker Gloria Macapagal-Arroyo demonstrated again that there is no awkward moment among her and previous President Joseph 'Erap' Ejercito Estrada. The two previous nation leaders met amid a medicinal and legitimate mission started by the Kabayan Party-list in Sampaloc, Manila out of appreciation for the late Congressman Ciriaco 'Acoy' Calalang, who spoke to the association in Congress until the point when his demise last September 23rd.

Arroyo told journalists when her gathering with Estrada at the occasion was raised that 'yes, we see and meet each other regularly because there are many occasions that previous presidents may work together'. 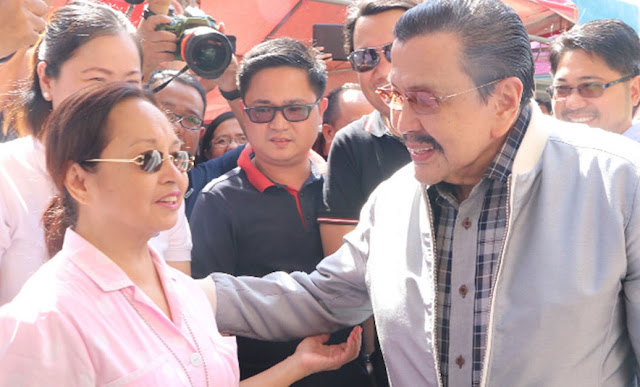 Estrada is right now Mayor of Manila City. Photographs from the occasion discharged by Arroyo's staff demonstrated the two previous presidents grinning at one another.

One photograph indicates one of Estrada's arms reached out to Arroyo's shoulder, and another demonstrating him getting a handle staring Arroyo in the face and putting them before his face while he is in a bowed down position.

Arroyo was Estrada's Vice President from 1998 until January 2001 when the last was removed amid the EDSA Dos over affirmations of defilement.

Arroyo assumed control over the Presidency and finished Estrada's term until 2004. She effectively looked for an entire six-year Presidential term from 2004 to 2010, yet not without assertions of appointive extortion. Amid that period, Estrada was indicted for loot, but at the same time was immediately absolved by Arroyo.
Share to: