entertainment 11:06 PM
A+ A-
Print Email
The greatest singer of all time, Aretha Franklin, 76, passed away on August 16, 2018 and the reason was reported to be an advanced pancreatic cancer.

Franklin, who rose to fame in the 60's & started her music career in the 50's, was the number one greatest singer of all time for years on Rolling Stones list. 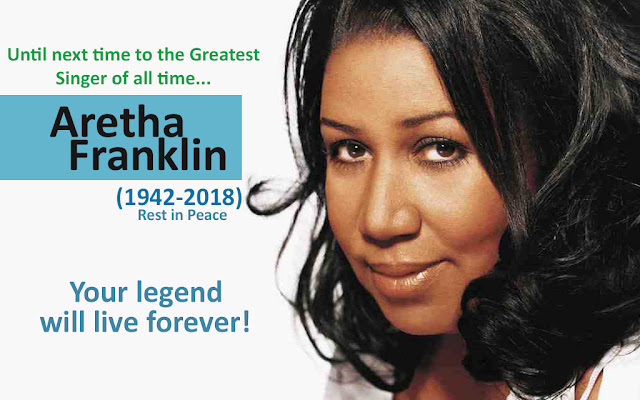 One of her greatest songs are "(You Make Me Feel Like A) Natural Woman", "Respect", "Chain of Fools", and more.

A legend born in Memphis, Tennessee to an itinerant preacher father and a piano player-vocalist mother.

Franklin made history as the first woman inducted in the Rock and Roll Hall of Fame, year 1987. In 1979, she as well received her Hollywood Walk of Fame. Bringing home a lot of awards including the Grammy Legend Award in 1991, and Grammy Lifetime Achievement Award in 1994.

She was the 2nd woman, as well, to be inducted in UK Music Hall of Fame, year 2005. In the same year she was honored with Presidential Medal of Freedom at the White House.

She got her GMA Gospel Music Hall of Fame in year 2012, and many more.

She is described as a woman who represents "the voice of the civil rights movement", and "the voice of black America", as well, the "symbol of black equality".

Aretha Franklin may be gone but her legend never will. She is an inspiration and a true icon.
Share to: