Pvao, in urgent for pension hike for Veterans as we are losing 300 a month

local, news 5:16 AM
A+ A-
Print Email
Pvao (Philippine Veterans Affairs Office) manager and Defense undersecretary Ernesto Carolina said war vets, extremely decreasing in number, have for some time been sitting tight for the entry of a benefits climb charge for senior veterans. Carolina said on Wednesday amid a hearing led by the Senate councils on National Defense and Security, and Finance, "you can simply envision the long holding up our senior veterans [have done]. They've been supplicating that this measure be passed".

The proposed "Demonstration Increasing the Monthly Pension of Senior Veterans" or Senate Bill No. 1766 tries to increment from ₱5,000 to ₱20,000 the maturity annuity of senior veterans who battled amid the second World War, Korean war and Vietnam war to supplement their assets. Carolina said that the issue isn't with the financial plan however with the lessening number of senior veterans who are the recipients of Senate Bill No. 1766. 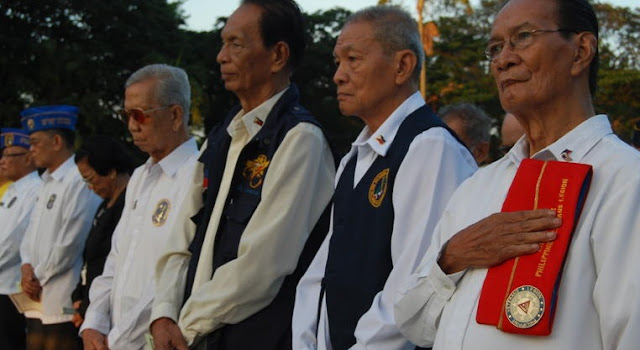 He said that 'to the extent the bill 1766 is concerned, cash isn't the issue. The issue is about the lessening number'. He clarified that 'PH is losing World War II veterans at the rate of 300 multi month, around 3,000 multi year and there are just 6,074 and we are tallying constantly'.

He then described that, 'they were around 26,000 when this was recorded amid the Fifteenth Congress. Sixteen thousand in the Sixteenth Congress, now they are just 6,074'. Carolina guaranteed that Pvao has adequate assets to meet the sum required for the annuity climb.

He said "during the current year, on the off chance that it is affirmed in July, we [will] get ₱560 million [since] we have ₱620 million in our investment funds". A few veterans appeared at the Senate hearing to express help for the section of the bill. Resigned equity Manuel Pamaran, a veteran, said 'the nearness here of our maturing veterans is a solid interest to the specialists worried that their wellbeing or survival is currently'.
Share to: