viral 10:08 PM
A+ A-
Print Email
Manny Pacquiao's mom, Dionesia Pacquiao (Mommy D), became viral after a video of her praying, kneeling, and throwing light punches in the air spun around the web --- during Pacquiao VS Lucas Matthysse fight in Kuala Lumpur, Malaysia on Sunday.

The last time Mommy D captured by cameras inside a boxing event arena was when Manny fought against Mayweather; where she kinda did the same way of praying. 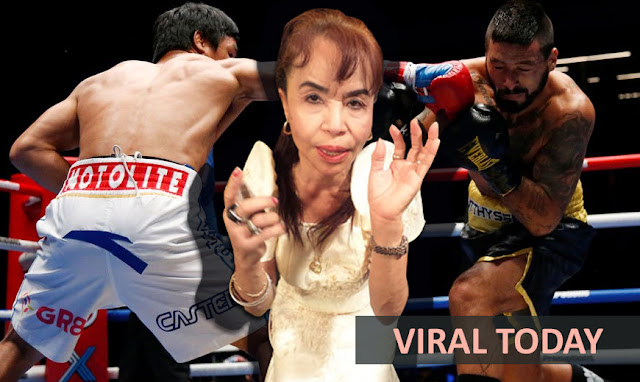 Some people say that Manny's mom did a voodoo (curse) to distract or place the opponent out of himself's focus. Mommy D defended herself saying that she was just praying (intensely) as she was holding her rosary and prayer booklet.

The video was uploaded by Mustapha Alauya on Facebook. The video as of posting has 34,000 "mixed expression responses", more than 100,000 shares, and more than 4 million views.
Ever since before, Mommy D really prays even at home whenever Manny is facing an opponent in a boxing ring. She even passed out after the fight. She is totally in focus of supporting her son though in her own opinion, she would like her son retire from boxing.

Towards the finish of the video, Mommy D can likewise be seen bowing on the floor. Pacquiao ruled Matthysse on the seventh round by means of Technical Knockout (TKO).

Check the viral video below: