Former Secretary of DENR Gina Lopez being ousted, Duterte thinks there was a conspiracy

local, news 12:02 AM
A+ A-
Print Email
President Rodrigo Duterte accepts there was an intrigue behind the expulsion of an Environment Secretary from office, Gina Lopez.

Wednesday, talking at the 31st commemoration of the Department of Environment and Natural Resources, the President stated, "The time when Ma'am Gina (Lopez) was removed by the Commission on Appointments, possibly on the grounds that she came excessively solid on the business matter of mining industry, I think there was an intrigue to oust her, and they did" (translated from Filipino). 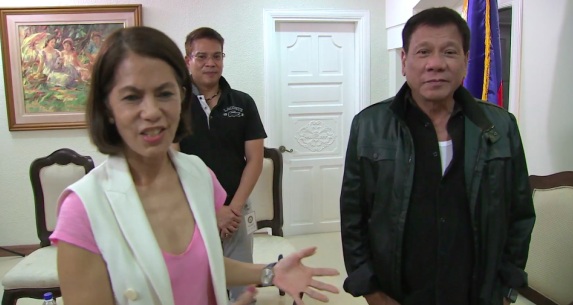 Duterte said Lopez was doing great as Secretary of DENR (Environment) --- pursuing the individuals who needed to decimate her local land. Lopez's arrangement as DENR Secretary was dismissed by the Commission on Appointments in March 2017 in the midst of issues over her disputable strategies and affirmed inadequacy. Previous Armed Forces Chief Roy Cimatu went up against the part as Environment Secretary in May 2017.

At a similar occasion, the President said he would inevitably put a stop to open-pit mining. Duterte said that "there will be a period that he should boycott open-pit mining". Duterte he could see indications of open-pit mines in mountains at whatever point he would go by chopper.

The President said this sort of mining "truly crushes the land". "In any case, we're getting something like 70 billion in mining industry. We can get it [the amount of money] in another way, probably. That is to say, with the diligent work of (Internal Revenue Commissioner Cesar) Dulay and (Customs Commissioner Isidro) Lapeña, I figure we could, perhaps no less than, 33% of what, we would have lost if we...", he included. The President went ahead to state those associated with open-pit mining knew he would in the long run put a stop to it.

He said that 'perhaps they'll attempt to resuscitate it at later, yet that is truly not his worry any longer. He will simply do what he needs to do amid my chance".
Share to: