FIBA World Cup Australia VS Philippines went fist to fist, ended the game with 1 VS 5 in the court

sports 9:47 PM
A+ A-
Print Email
On the 2nd of July, Monday, Australia and Philippines basketball teams for FIBA World Cup Asian Qualifier, went fist to fist inside the court resulting to a riot (fight). Flying kicks, punches, etc. were seen inside the Philippine Arena.

The game had to stop for awhile and a meeting being conducted due to the said improper actions from both teams. 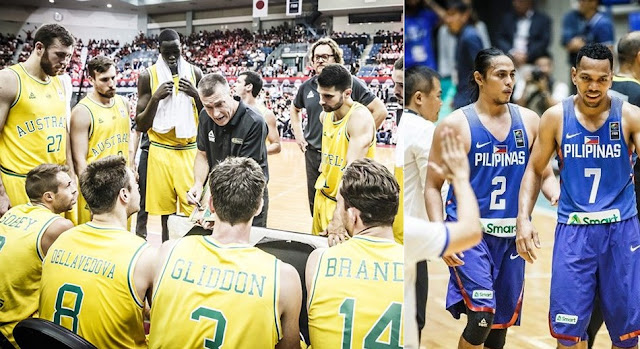 4 minutes & a second on third quarter was waiting to be finished but can't be continued as of the moment due to the said riot where even seated players on bench joined the physical fight.

As the announcer mentioned, any bench players who joined or not joining the fight but went inside the court will be penalized or punished, or worst... suspended or kickout. Australia has the lead in the game, ahead 79-48.

The scuffle seemed to have begun when Australia's Daniel Kickert got Roger Pogoy with a bushwhack hit, after the two players had just been at each other's throats for larger part of the amusement. It turned into a free for all from that point, with Jayson Castro retaliating with a punch and Andray Blatche pushing an Australian player.

Players from the Gilas seat got included by then, with Calvin Abueva, Matthew Wright and Carl Bryan Cruz --- every one of whom were not handled in --- hurrying the court.

The referees and other important personnel went away to discuss sanctions.

9:32 PM ended the announcement the ejection of 4 Australian players, and 9 players from Gilas Pilipinas.

The game continues with 3 VS 5, 3 from Philippines, 5 from Australia inside the court.

The game ended without finishing the entire game since Philippines has 1 player left VS 5 from Australia. The other 2 Gilas players graduated. Final score is 89-53 in favor of Australia.
Share to: