local, news 11:10 AM
A+ A-
Print Email
On Monday, Defense Secretary Delfin Lorenzana  focused on that the nation is still in charge and in control of its 9 islands in the West Philippine Sea in opposition to theory that China took some of it. Lorenzana made the comment following a SWS (Social Weather Stations) Survey that demonstrated 87%, or around nine of 10 grown-up Filipinos, trust it was imperative to recover control of the Chinese-held islands in the West Philippine Sea. 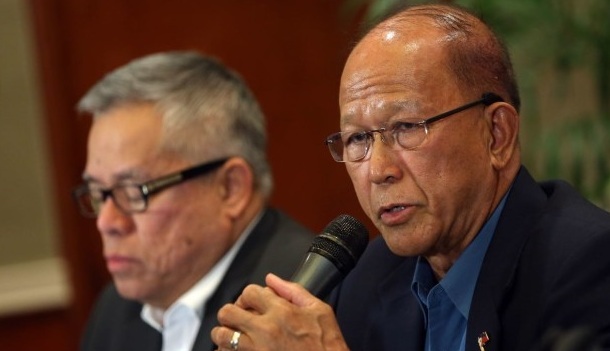 He, then, included, "While Panatag is under the compelling control of the Chinese, our anglers could angle in the zone". Lorenzana emphasized that there is nothing to retake as the nation did not lose any islands in the West Philippine Sea.

Lorenzana said then said, "Retake what? Did we lose any Islands? The Chinese never took any of our involved Islands. They assumed control abandoned reefs and transformed them into Islands.

Had we been more astute we could have possessed those reefs also when we involved the nine Islands in the 70s". "I will toss the inquiry back. How would you settle the issue with a territorial power that is prepared to guard its "advantage" militarily? It's anything but difficult to state 'let us declare our rights and power'. Question is How?"

He included, "be that as it may, first was there power disregarded? We have the sovereign ideal to abuse the assets however the WPS isn't our sovereign region. Panatag Shoal (because of the arbitral decision) is currently the angling ground not solely of the Filipinos but rather of Chinese, Vietnamese and Taiwanese too". Lorenzana said one can't blame the Chief Executive for inaction on the grounds that, after his two-sided chats with Chinese President Xi Jinping, Filipino anglers came back to Panatag to angle.

Lorenzana said, "we can resupply our troops on our islands without obstruction. An understanding was made that the two gatherings can't involve new highlights and none has done as such far in consistence with this. Also, there is the discussion of joint improvement of gas and oil assets in the zone.

Tourism and exchange have thrived particularly fare of horticultural items,". Lorenzana said think about these positive advancements from that of the past organization with their activity heading off to the Permanent Court of Arbitration (PCA), a global arbitral court, a body not under the United Nations and doesn't have an implementation component.

Lorenzana said, "China did not take an interest. We won however it is a vacant triumph: The Chinese won't leave our EEZ and rather it keeps on affirming its chronicled rights over the zones inside the nine-dash line. Furthermore, it quit purchasing our bananas and pineapples, Chinese voyagers dwindled to close to zero, and our anglers were banned from going to Panatag to angle". Lorenzana said it will require investment before the contention is settled and possibly not in our lifetime.

"(Indeed) the Chinese said that possibly we will be unable to determine this in our lifetime. Possibly our relatives will be more astute. Interim, let us use whatever preferred standpoint we need to enhance our economy and the capacities of our AFP and help in keeping up Regional peace and strength". Returning to the study, Duterte said there must be some kind of problem with the way the review questions were created considering just 9 out of 10 Filipinos concurred that it was imperative to recapture control of the Chinese-held islands in the West Philippine Sea. He said, "It ought to be consistent that we as a whole need the control and abuse of our EEZ".

He said, "So there are 10 percent who objects to the possibility that we gain back power? Who are these individuals? Why they didn't want to bring back the control of the West Philippine Sea?

If I somehow managed to make a review I would isolate the two --- regardless of whether I need control of the WPS and do you affirmed of the administration's activity. Here I would clarify what the Duterte organization found when it accept office and what is acquiring now in the West Philippine Sea".
Share to: