Who will be completing the Final 6 for the Final Showdown

entertainment 11:20 AM
A+ A-
Print Email
It's Arabelle dela Cruz VS Remy Luntayao VS Sofronio Vasquez VS Steven Paysu, who among these four will make it to the Final 6? Who among the four last remaining finalists in the qualifying round will compete against Janine Berdin, Ato Arman, Anton Antenorcruz, and Reggie Tortugo?

The heat is on as the day goes closer to the ending of another amazing season of It's Showtime's "Tawag Ng Tanghalan". It will be a battle of hearts and determination to the remaining four since only two of them will make it to the final showdown in Aliw Theater this June the 2nd, Saturday. 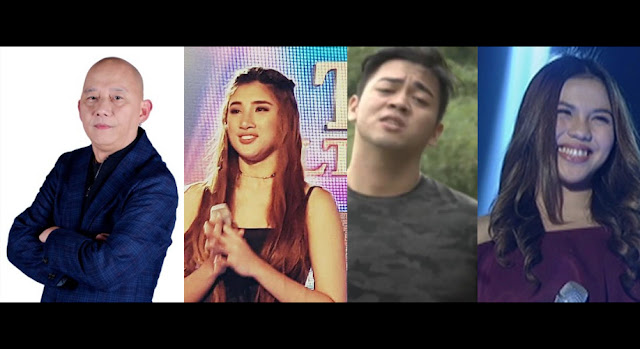 Arabelle dela Cruz, a Luzon contender, is the eldest among her siblings, and a good daughter to her parents. She is the longest competitor to appear after the last semi-finals since she came back for another week for the Ultimate Resbak, and this week for the Grand Finals week. She won the Ultimate Resbak after her explosive performances singing Beyonce's "If I Were a Boy", and Whitney Houston's "Run to You". After those performances she became a fiercer competitor, a girl who came out from her shell and sing her heart out. She was able to defend her seat on that time until she was declared as one of the finalists along with Ato to compete for the Finals week.

Remy Luntayao, a Visayas contender, a good daughter and a responsible individual. Herself and her siblings can sing and they are, as well, performing as a group in some places. Remy was known for singing some upbeat songs like Tina Turner's songs, Jessie J's "Bang bang", and so on. That made her one of the contenders to move to the Finals week along with Anton Antenorcruz during their quarter. Her mom was sent to the last destination after passing away, and that had happened a day before she needs to compete for a place in June the 2nd. It is hard for her but she is fighting to continue the life that surely her mom would want her to do.

Sofronio Vasquez, a good friend and a determined one. He has a heavy weight before but because of his determination he was able to lose weight and became healthier. Sofronio is a Mindanao contender, and a cousin of Mr Pastillas, Richard Parojinog. He has been fighting to get a place in the final ever since. After some time had passed he was able to get a ticket to finals as he won along with Tuko delos Reyes during the their quarter's semis. Although Tuko was unsuccessful to his journey, Sofronio is there to continue the fight for their quarter.

Steven Paysu, a Global contender, is a loving husband and father. Steven showed his skills as a seasoned singer whenever he performs. He made the judges cry and even believed by host Vice Ganda as the most different contender among everyone else in the competition, he is a different-leveled competitor [higher level]. He is actually more than 50 years old but he still has a golden voice of a young man whenever he sings. Steven proved to everyone that at any age you can still make things happen.

Four names that are waiting for their will in the competition, but only two would be successful. Who among them would shine better.

Support your favorite performer who gives you chill and wow factor today by voting online at tntvote.abs-cbn.com or thru text by typing TAWAG <space> NAME OF FINALIST and send to 2366, remember only one vote per sim.
Share to: