entertainment 5:03 PM
A+ A-
Print Email
In Vice Ganda's long-time evening show Gandang Gabi Vice (GGV), a celebration was happening, it is actually the 7 years of the show with a #GGVPito.

On that Sunday evening, one of his guests is the King of Talk, Mr Boy Abunda. 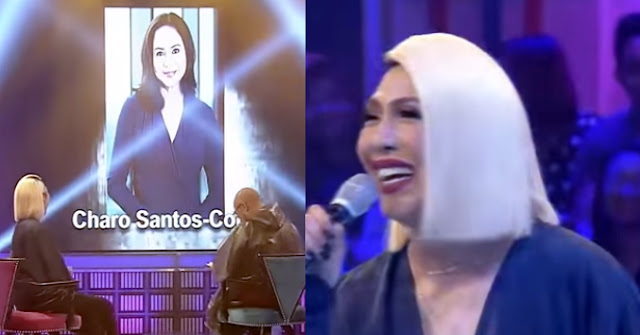 Abunda's task is to ask Vice what question he would like to ask a person he might afraid of facing in person, and some personalities that he likes to face, and so on. The short segment is called, "Tanong mo, Mukha mo" (Your Question, Your Face), and there are seven rectangle shapes with question marks telling 7 personalities that Vice knew and afraid of facing or love to or doesn't like to.

Abunda revealed the first photo and it was one of the heads of the ABS-CBN, Ms Charo Santos-Concio, who as well is the host of the longest drama anthology in the country, Maalaala Mo Kaya [Will you remember] -MMK.

Vice hold his breath for a while, and prepare his question for the respectable artist and head. Before asking anything he mentioned in a joke that this might be the last anniversary celebration of his show, GGV.

After a few seconds, he then delivered his question in Filipino language (translated in English), "Of all dress, why you are wearing the same dress that I am wearing today (based on the dress Ms Santos-Concio is wearing)". Then he included the funny words he popularized, "ganda ka?" (are you pretty?).

Everyone was laughing knowing that Vice is afraid to face Ms Santos-Concio and his question to the head is hilarious.

Watch the segment below: