Tawag ng Tanghalan 2 Grand Finals: Will it be the fan-favorite or the best?

entertainment 6:06 AM
A+ A-
Print Email
Today is the day of the Finale of Tawag ng Tanghalan season 2, will it be the fan-favorite finalist who will snatch a win or the best among the six?

The six super finalists are in, they are super since the rest of the finalists were already eliminated, and they are the remaining ones. It will be the Tuesday winners Janine Berdin (Visayas) VS Ato Arman (Mindanao) VS the Wednesday winner Anton Atenorcruz (Metro Manila) VS the Thursday winner Reggie Tortugo (Visayas) VS the Friday winners Steven Paysu (Global) VS Arabelle dela Cruz (Luzon). 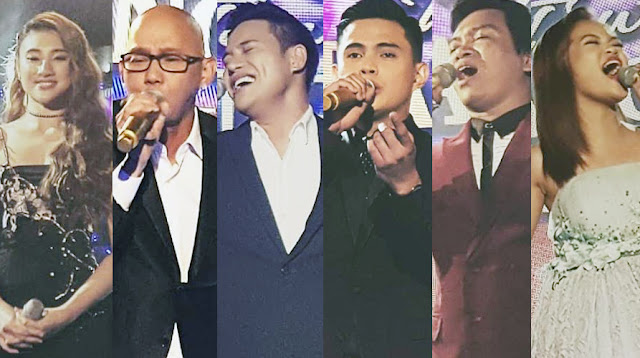 Today is the day of the battle, who among the final six will take the lead and be declared as the winner of Tawag Ng Tanghalan Year 2?

Janine Berdin got a standing ovation from the judges on her Tuesday performance, singing Eraserheads' song "With a Smile", and some of the people who are familiar with the song just know the real meaning of the song after Janine interpreted it. It left some judges and host Vice Ganda teary with her rendition of the song. Janine is a contender from Cebu representing Visayas.

Ato Arman touches people's heart whenever he performs. He lost in his quarter and was always in the bottom that time, but this time it's his time. He even won over his previous competitors. He was loved by most people after the Ultimate Resbak round when he won against the Biritera Diva Aila Santos, took the seat of Mark Douglas Dagal, and defended his seat of power. Up until now, Ato is still popular due to his powerful voice and emotional connection every time he performs. He is from Bukidnon representing Mindanao.

Anton Antenorcruz, the RnB soul heartthrob. He is handsome, yes, but he has skills in singing as well. Anton wowed everyone especially during his quarter because every time he performs he got a massive standing ovation from the judges. He is a complete package. Anton is from Metro Manila, and of course, will be representing Metro Manila.

Reggie Tortugo, the man whose voice is not just a falsetto, but really a real voice singing. He is very likable and actually every time Vice meet Reggie there is a fun connection. Reggie has also the looks, the height, I mean, he is as well a complete package. Aside from being a great singer, he is also a good father to his children. Reggie is from Leyte and will also represent Visayas as Janine.

Steven Paysu, the oldest in the group but with a voice of a young man whenever he sings. There is something about his voice that makes it different from the other contestants. He has his own voice, own style, truly he is a seasoned singer. Steven is loved by many after he offered a song to his wife during the Global round and it touched everyone's heart. He has an amazing powerful voice that touches everyone's heart. Steven is from California, USA and will represent Global.

Arabelle dela Cruz is a young woman but with a great big voice. Her performances of Beyonce's "If I Were a Boy", and Whitney Houston's "Run to You", left a trademark of her in people's hearts. She is the one and only contestant who fought 3 weeks straight in the competition --- from her quarter's semi-finals , then the Ultimate Resbak, up to this Finale. She may be tired but her perseverance to win takes over her. Arabelle is from Laguna and will represent Luzon.

Whoever wins this finale, it might be based on the public itself. Season 1 of Tawag ng Tanghalan declared Noven Belleza as the winner, and it was all through the support of those people who truly believed in him that he should be winning that time --- and I don't argue with that coz he really did a great job on that finale.

So, if this season (Year 2) will let people decide the winner, support the person whom you think did the best performance of that current day. Not because of who he is, or what he has been through. Always remember that we are creating a winner that represents the country's ability to sing, that if "people who has no idea about the country's singing skill" will watch the winner of this show "he/she would say that Filipinos are truly a vocal beast".
Share to: