Miss Q and A winner is Juliana Parizcova Segovia

It is like, she started the game, and then ended it with flying colors. 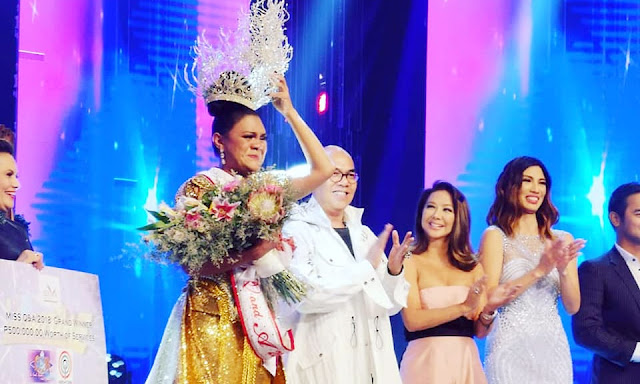 Juliana is from Pasay City.

It was the 21st of July 2017, almost a year ago when she started the fight for the crown. On her very first intro she mentioned, "ibigin mo lang ako hashtag Niko, paggising mo bukas may motor ka na" (just love me hashtag Niko, [by then] tomorrow if you wake up, you will have a motorcyle) and everyone was laughing on it.

"Where did you first meet", Vice asked. "In baskerball court po", Juliana replied. She then added that 'that time, the players' jersey were given [to the audience], that guy gave his jersey to Juliana... and it doesn't stop there, that guy asked for her number. Then that guy watches her [a couple of times] in Miss Gay pageants, and after that, the guy courted her'.

"How did he court you", Vice asked. "He did everything, he treated me like a lady", she responded.

Vice then asked that time, "what is it with you that you are being loved constantly". Her response was simple, "the question is... what is not with me, why I have been loved", and everyone in the crowd was shouting for joy. She then added, "[candidate number 1] has it all...", Vice continued, "and what is lacking is in you, but [what was lacking] was searched in you".

From that day her win was inevitable, she continued to win up to her 10th crown which decided by the management to list her as a hall of famer that is advancing to the grand finals.

She then got a lot of TV appearances, and even appeared on Vice Ganda's movie, "Gandarrapiddo: The Revenger Squad".

She then came back today to win the crown which she did not fail to do so. She became part of the top 6 up to top 3.

On the final question, "what do you think is the hardest question, and why".

("As a [usual pageant] competitor and as a gay, we all know that we don't have any fight that we are afraid of. We don't surrender. But the hardest question that I've heard and was thrown to me is what I am afraid of. Do you know what I am afraid of? That is to lose my mom --- beside me. Because she is the reason why I am here and a fighter and with perseverance. She is my eyes, my mouth, my ears, my hands, and my feet. If I lost her, I don't know how I will fight anymore.")

At the end of the grandest competition, she was declared the Miss Q and A winner.

Juliana won a crown worth ₱300,000; a trophy; a ₱500,000 retoke (plastic surgery) package; a paid trip for 2 to Thailand; ₱900,000 worth of business package from Aficionado, and ₱1 million cash tax free courtesy of Vice Cosmetics.

Rewatch her moments below: