entertainment 6:27 PM
A+ A-
Print Email
It's Showtime last Miss Q and A Resbek of the week went head to head face off between the two candidates who became competitors with each other the last time, crowd favorite Elsa Droga and the Barangay official Kristine Ibardolaza.

The final round was a debate on a topic: who will win in the war, the rats (daga) or the cockroaches (ipis). Elsa fated to pick rats while Kristine fated to have the cockroaches. 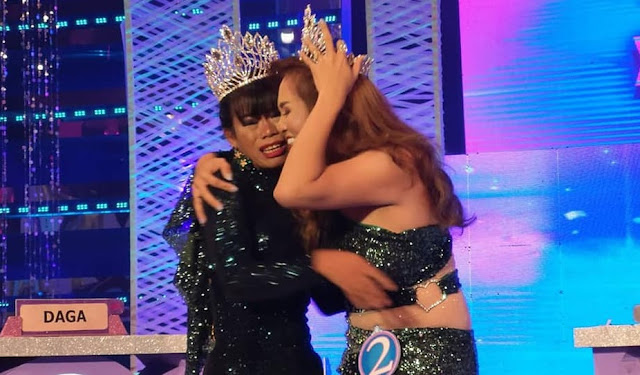 In their opening statement, Elsa said that 'if there's a war a rat will win [against the cockroaches] because they are smart coz they have brains and they can get inside any hole due to its size. Even if they are dirty or black, they have the ability to hide in the world. In the war, the rat has many ways to get away from it. And it is said in the "ano" (what) that rats are smart, that a rat has a brain' (translated from Filipino).

Kristine's opening statement was 'she believes that cockroaches will win, we should not minimize the capacity of the cockroaches because even they are small, they get to multiply faster. In their (capacity) to multiply, they can go together [as one] to win in the war. Just like the Filipinos, despite the tragedy that comes to their lives, they face it together as one and they would really win in the future. The cockroaches are so smelly that makes the people lose if they have smelt them. The cockroaches as well gives work to people like [factory] of insect repellent' (translated from Filipino).

During the face to face, no hitting below the belt, no bad words, and so on, both of them were given 15 seconds each in two turns to defend and argue their answers.

Host Vice Ganda started the timer and Elsa started to speak, she said that 'the rat will win the war because it has a brain and it is smart, the cockroaches just have wings and can't go to war: in just one spray of "eme-eme ng ano, pang spray" [insect repellent] it could kill them, but the rat can run faster, he can do everything to get away and to fight'.

The beep came in and it's Kristine's turn, she said that 'Bes (best friend), thanks for the mention of those cockroaches having wings, you just proved it that they can fly and can easily hide. And what did you say, "the rat can't get to holes", the cockroaches are smaller [than the rats], so remember that they can hide easier'.

Vice stopped the debate for awhile and said the debate went great, and joked to candidate number 3 Elsa that 'Elsa seemed to look like she was about to cry'. He then let the two candidates inhale and exhale to calm from the tense in the debate.

The beep then came in and Kristine said that 'our topic is about who will win in drugs (mistaken: supposed to be war), it's not about the smell. The rat can be eaten by human, the cockroaches can't be [eaten]. Remember that in this society, we should be "useful"'... And the time ends. 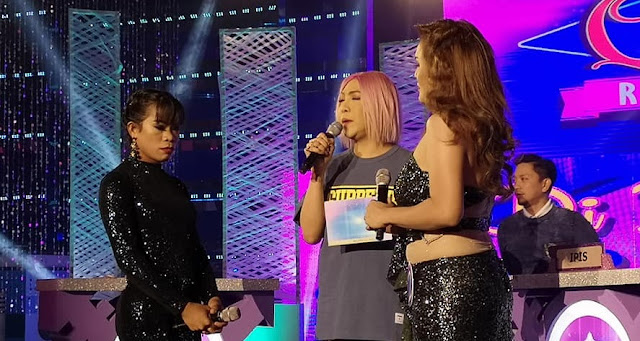 Vice seems to like the debate and wanted more and audience agreed with it. Another 15 seconds for each was given.

They even went funny for the picking on who goes first, as they did rock, paper, scissors.

Kristine then continued the debate saying that 'the cockroaches will win the war since Elsa said it has wings, and you cannot underestimate [the power] of the small ones, as they are the one who can get something in your eyes. They will win in any war because they will go together as one'.

Elsa said in her turn that 'even (the cockroaches) go together as one, if it will be caught with fishnet, it will be gone [will be caught]. The rat will keep on running, it will keep on evading (going in any holes). Just for example, I'll throw the rat to you and it explodes & scatters, it will be very smelly, that is why you will lose in the war'.

And the debate ended. They went hugging each other.

Elsa can't hold her tears as she thought she will lose the chance to go to the semi-finals. Both of them got a good feedback from the judges and it was announced that both of them win the final round and will compete on the semi-finals.

While, Venus Garcia was not able to enter the final round as she loses from Elsa and Kristine on the first round (in "Tumpak Ganern Ganern").
Share to: