entertainment 7:30 PM
A+ A-
Print Email
Miss Q and A Semi-Finals on It's Showtime continues, and a resbekla won the day stopping candidate number 5 Marigona Dona Dragusha to sweep a win.

Marigona almost sweep a win after competing in all rounds in debate, either being picked by contenders or chose herself to fight for "Di Ba Teh?" round. 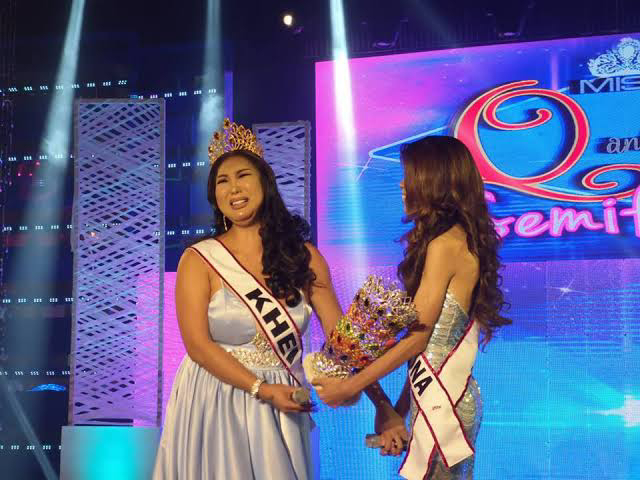 On the first round, Pau Bermudez won the birtud (efficacy); a power to be the first candidate to read the topic of the specific debate round, and a power to choose her side (to defend) & choose who will start the debate.

The power includes, as well, the ability to pass the specific round of debate and select any two of the remaining candidates to compete "face to face" with the given topic. Not just that, if she will pass the debate, she can assign the answers to the 2 candidates that she will be picking and as well, can choose who among the two will give her words first.

In case she chose to fight, she will either win ₱25,000 and compete again for another round, or go home.

Marigona won the round as she relates her answer to success, 'it would be better to sleep in the lower bed since you will feel the success if you start from the lower portion going to the top [of your dreams], rather than sleeping on the upper bed where if you started your journey on the top and you fall, it will be so hurtful' (translated). She took a ₱25,000 prize and will stay for another round.

The second round was answered by Marigona correctly and so she got the birtud. She is fierce as she chose to fight rather than pass, and she picked Pau to be against her.

The topic was "which will give you more bubbles, [detergent] bar (bareta) or [detergent] powder" (translated from Filipino). She picked powder and again... won the round plus added another ₱25,000 on her winnings. Pau said that 'bars are solid, just like Filipinos [solid]', but Marigona defended by saying 'not all solid are stable, just like a block of cement, drop it and it will be broken'. She added that 'the powder are small and tiny but like Filipinos, even how small or tiny they are, if they go together as one, they will win'.

On the 3rd round, Khei Perlaoan took the birtud and pass the round, giving it to the remaining two, Marigona and Angel Dumalay Alferos. The topic was, "which is weaker, nilasing na hipon (besotted/intoxicated shrimp) or pinaupong manok (seated chicken) --- both are food in the Philippines" (translated).

Khei gave the nilasing na hipon to Marigona and she, as well, chose Marigona to start the debate since she knew she is good at it. Well, Marigona again won the round, she said that 'if [a person] is intoxicated that person can't do anything because he is drunk... he is weak, and so it will be the intoxicated shrimp that is weaker than [someone who is just sitting]'.

On the final round, Khei got the birtud again. The good thing about it is she will be able to pick her answer to defend wherein the topic is "which among the two should be passed as a law first, Same-Sex marriage or Divorce" (translated).

Obviously, Khei picked what most of the LGBTQs are fighting for, and that is the "Same-Sex Marriage". Marigona had a hard time defending Divorce though she gave a good fight.

In the end, Khei won the day making it the first resbek queen to advance to the Grand Finals of Miss Q and A which will be done on the 30th of June, this year.