entertainment 1:36 PM
A+ A-
Print Email
Semi-finals of Miss Q and A on It's Showtime has been started. And the ending was a very close fight between two amazing queens, Lars Pacheco and Angelika Mapanganib.

Five queens competed for a grand final slot. The mechanic of the game is a mix of "tumpak ganern round" and "di ba teh?", where a contestant should answer a question by pressing a buzzer. After giving a correct answer, a "birtud" will be given to them to which they can pass the round for debate to get to another round, or "ravaaan" (fight) for debate and win ₱25,000 plus will remain on stage for another round. In case a contestant lose on a debate, they will be sent home. 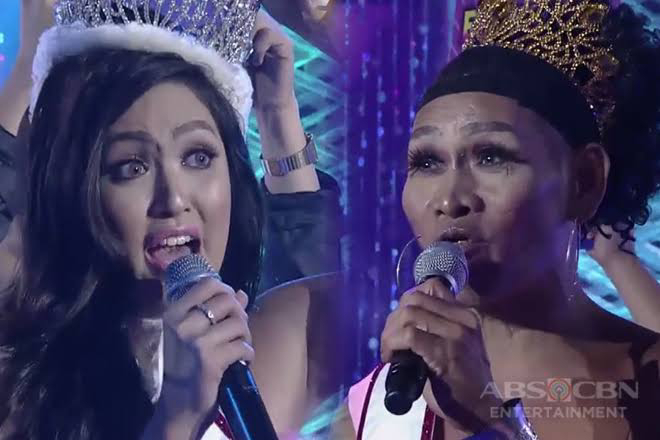 On the first round, Angelika Mapanganib was able to get the birtud and got the chance to read the topic of the debate in advance and choose between two options. Angelika's topic was "saan mas maganda" (where is better), doon (there) or dito (here).

She was fierce and chose to debate. She then picked Zoren to debate against her. Angelika as well picked her option which is dito. On this round, Angelika was honest on her opinion that being here is better, because here in It's Showtime, she became known, opportunity was given, and so on. Zoren debate that doon is better because there could give more opportunity to escape dito and find som [better] opportunities there.

Angelika won the round and was able to get back for another fight and secured ₱25,000.

The topic was "ano ang mas madalas" (what is more often), araw-araw (everyday) or gabi-gabi (every night). Lars chose to fight and picked araw-araw.

She as well chose Eula to go first in the debate. Eula defend her gabi-gabi but Lars won it by telling that you can't do anything at night because it is sleep time, everyday is more often since people are awake and can do more on that time.

Lars secured ₱25,000 and will still fight for another round.

During the 3rd round, Lars got the correct answer again and chose to "pass the debate", it means remaining contestants Angelika and Lucky Becky. Since Lars won the round, she got the power to choose where to give the choices. The topic was "who is whiter", white lady or snow white.

Lars gave snow white to Angelika, and she gave white lady to Lucky.

Angelika killed the round by saying that snow white is whiter since it was taught to us before, not just her physical beauty but the inner beauty that she has made her whiter [than the white lady]. Lucky defended that white lady from it's clothes made her whiter. Still Angelika slayed with her answer and secured another ₱25,000 and will advance to the final round against Lars.

During the final debate, Lars got the power to choose since she was the first one to give a correct answer between them, Angelika. The topic was serious this time, "which one should be prioritized, education or health".

The debate went neck to neck, head to head, since both of them gave a very good arguments. Lars said that "you can't go to school if you are malnourished or hungry, you cannot focus on your studies", while Angelika backfires that "Filipinos will go to school if they want to even they are hungry [or malnourished], coz Filipino has that spirit [that despite the hardships in life, they are willing to finish their studies], and that is why she stood for education since with this people can get a better life [in this society]".

Lars was lucky to say her thoughts in the final 15 seconds of the debate since Angelika can't break it no more. Lars as well included a famous phrase, "health is wealth", which is a fact. But we cannot forget how Angelika defended "education".

Sadly, there is no tie in semi-finals. Lars won the day and Angelika was sent home.

Well, an announcement will be made for the candidates who went home this coming Friday, it might let them go back to fight for another chance to get to the Grand Finals.

Winner of Miss Q and A will receive ₱500,000 worth of plastic surgery (if they want to enhance their beauty or fix their teeth, and so on). Winner will also get the chance to visit Thailand with someone (1) for free, no expenses on her side. And last but not the least, she will become a millionaire, winning ₱1 million tax free.
Share to: