Despite being ganged up, still Kristine Ibardolaza took home the crown

entertainment 4:35 PM
A+ A-
Print Email
Thursday, on "It's Showtime", Miss Q and A Semi-finals declared Kristine Ibardolaza as the winner of this day's competition. Some candidates revealed that they were all ganging up against Kristine, and Kristine understood and respected the strategy, telling that 'some girls are really ganging up on resbek queens'.

This day, there were 6 candidates competing for the entry on the finals this coming Saturday, June 30th. The other 5 semi-finalists were Exur Pastor Rañoa, Rome Gregorio Pinay Filipino, Maria Cassandra Lopez, Elem Adarna Smith, and President Ganda Curtis-Smith. 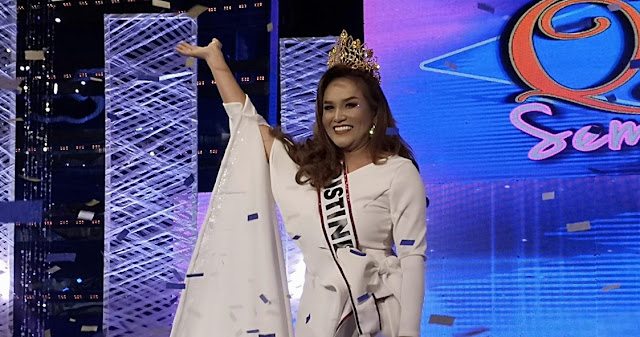 The first birtud (efficacy) went to Exur after giving the correct answer on the first round. As part of her strategy, she did not pursue the debate, and just gave the battle to Kristine and President.

The topic was, "sino ang mas bad trip kausap, [nag]dunung-dunungan o [nag]tatanga-tangahan" (Which one is unpleasant to talk with, a pretender to knowledge/skill or someone who acts like an idiot?). Exur distributed the answer, giving tanga-tangahan to Kristine, and dunung-dunungan to President. She, as well, chose President to speak first.

President started the battle defending her side that 'dunung-dunungan gives you more unpleasant talk since this kind of people have a lot to talk even you are not yet finished just to prove that he knows everything despite of being not knowledgeable enough (translated from Tagalog)'. Kristine defended her side by stating that 'tanga-tangahan gives you more unpleasant talk since they know that they are already knowledgeable yet still talking like he doesn't know everything'. President rebutted that 'tanga-tangahan may not be unpleasant since they could be funny', while Kristine inserted that 'dunung-dunungan may not be unpleasant since you know that they are just pretending to be knowledgeable...' (all translated from Tagalog/Filipino).

The decision was not unanimous and declared Kristine the winner of the first debate of the day.

On the second round, Rome got the birtud and passed the debate to Kristine again, against Elem. The topic was, "ano ang mas nakakabastos, [tawagin ka ng] hoy o psssst...?" (which one is more disrespectful, [to call/address you as] hoy or psssst...?) Rome gave the psssst... to Kristine and wanted Kristine to deliver first on the debate.

Kristine said that 'psssst... is more disrespectful since that way of calling someone is like calling a dog', while Elem said that 'hoy is more disrespectful, psssst... is just sounded like peeing so it doesn't hurt...', but Kristine rebutted that 'hoy stands for Honest Outstanding You, which calling you hoy is saying you are outstanding'. The decision of the judges is unanimous, giving the win to Kristine.

The 3rd round's birtud went to Rome once again, but this time she chose to fight against Kristine. The topic was "ano ang mas masaya, pasko o bagong taon?" (Which is happier, Christmas or New Year?). Rome picked Christmas and let Kristine start the argument.

Kristine said that 'New Year is happier [than Christmas] since during this time everyone's got to change their lives (from bad habits, etc.), just like the New Year jingle, "bagong taon, magbagong buhay [ng lumigaya ang ating bayan]" (New year, change your (ugly past) life [to make the country happy])'. Rome defended that 'Christmas is the happier one since everyone celebrates the joy of Christmas...'. On Kristine's turn, she said that 'not everyone celebrates Christmas since there are different religions out there, but during new year, everyone could celebrate and change their ugly past life together, just like what she did for herself and her child', this time the audience applaud her. Rome has her turn afterwards but in the end, Kristine won the round unanimously.

On the fourth round, Kristine got the birtud and smartly chose to pass the debate and gave it to the 2 remaining candidates, Exur and Cassandra.

On the final round, Kristine luckily got the last birtud of the day and got the power to see the topic of the debate earlier than Exur and, as well, the power to select one among the two sides to defend.

"With due respect, the government has done some wrong decisions for the country [and that's the reason we should prioritized the church/religion's rules]", said Exur. Kristine responded, "as an elected official, it is better to follow the rules of the government so that [we] will not be punished. And remember, there are many religion (meaning different rules and regulations), the government is one".

The day ended declaring another resbekla queen (wildcard queen), Kristine Ibardolaza, the winner and advancing to the Grand Finals.


Kristine, as a defending queen, lost to Elsa Droga Mendoza during the daily round and she became the most controversial queen after losing to Elsa. She came back and compete against Elsa on resbek (wildcard) round, and won it together with Elsa (tied).