entertainment 12:04 PM
A+ A-
Print Email
Angelica Mapanganib who brought laughter to "madlang people" went straight to the semi-final after winning the Miss Q and A Resbek on Tuesday.

One of the top segments of the hit noontime show "It's Showtime" is the Miss Q and A where LGBTQ people compete and physical beauty is not part of the criteria --- and Angelica Mapanganib is one of the semi-finalists at that moment. 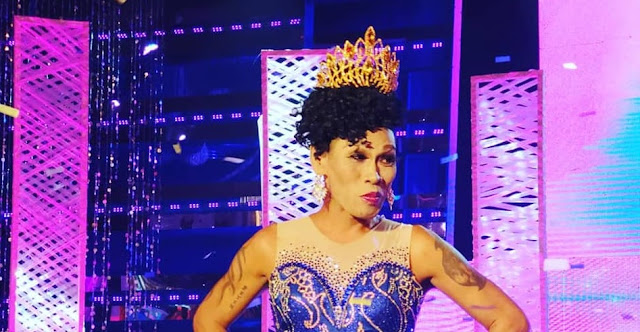 The show started with full energy, Angelica competed with 2 other LGBTQs, Nicole Quiambao Salvador and Queen Isabela Lopez --- who became a co-host for a day replacing "ate girl", with the help of It's Showtime host Vice Ganda.

During the first round of the segment "Tumpak Ganern Ganern" (Resbek term), the writers went crazy a bit looking for an answer on Google website after Angelica answered the question "... ano naman sa Tagalog ang North" (What is the Tagalog word for North). She said "norte" as her translation of North in Tagalog. It took time before it was judged as a correct answer --- which made Angelica a winner in the first round.

Many netizens agree and disagree with the answer, some says that norte is a Spanish word, and some defended that norte is now accepted as Tagalog/Filipino language since spoon is called "kutsara" from Spanish word cuchara, fork is "tinidor" from tenedor, and more.

The game continued after Queen Isabela Lopez won the first round as well --- sending Nicole home.

The final round "Di Ba Teh?" started, and this time the two contenders will debate and defend their fated choice.

That day, they will be debating on which one hurts the most, sore ingrown or a pimple inside the nose. Angelica got the sore ingrown while the other one was fated to Queen Isabela.

Angelica said that 'sore ingrown hurt the most because most of the ladies don't work after having it, they can't cook, they can't walk properly, and they can't do their laundry. And if you will take it for granted it could be infected and that may lead to death'.

Queen Isabela defended hers by saying that 'pimple inside the nose is more hurtful because it is not just for girls but for boys as well, and due to a huge finger, it will be hard for people to take out the dirt inside the nose [because the pimple may be touched and it hurts]'.

But after the 60 seconds + 30 seconds face off, Queen Isabela lost for some words while Angelica was firmed.

In the end, Angelica won the day and she is advancing to Miss Q and A's semi-finals. She will be joining winners including the Miss Q and A recent winner is wittier than what you expected, President Ganda Curtis-Smith.

Angelica said on the show earlier that part of her winnings will be given to her children. She mentioned on the show that she was in the dark moment before --- with vices --- that made herself separated from her wife [and kids].