A virgin woman gave birth to a baby girl

viral 9:59 PM
A+ A-
Print Email
On RMN DXPR report, a virgin woman named Joy gave birth to a baby girl despite that she was never touched by anybody.

She said that after she got out from the hospital, her father questioned why her other stomach is big (she said during the interview with DXPR reporter), the other one is not. She then decided to do an ultrasound.

"When I went home, that's the result, something is filling my stomach", she said. 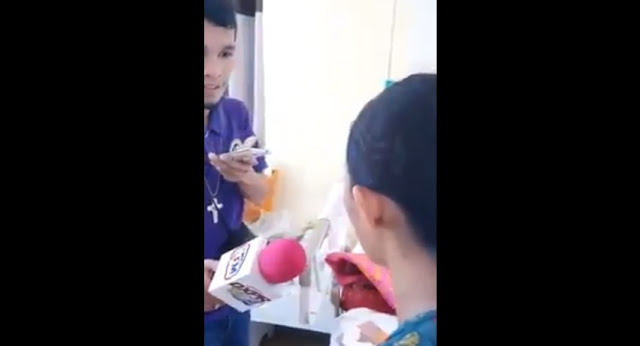 She response that 'she doesn't have any idea'.

"How about your parents, what can they say [about it]? Suggestions", reporter asked. "Their suggestion is they (the parents) will check the neck of a woman, if the woman is pregnant [the neck] will keep on moving, mine is normal", she answered.

"Do you have any morning sickness or food cravings"?

"No", she answered the reporter.

The baby was carried by her for 9 months, starting on September (2017). By that time she was studying and she confirmed that she doesn't have any "live-in partner" by that time since her father is strict and always looking after her.

On her ultrasound, there is a finding that she was not just carrying a baby, but a wood as well was inside her tummy with the baby and people said that it might be the baby's 'twin'.

The wood went out together with her child when she delivered.

She gave birth to the child on June 22nd of this year 2018. She is naming the baby "Sitti Hannah" (not the confirmed spelling of the name), and reason of the name is --- since she is a Muslim by religion.

The doctor's thought about her pregnancy, 'this could be gotten from water since the sperm cell never dies' she said as she continued to discuss. The sperm may get inside her organ and that is why a baby was developed --- she was conceived.

She, as well, said that she [is fond] of going to pools to swim, and sometimesm she is swimming with a male company.

The reporter asked if she went to a quack doctor.

Despite giving birth to a child she never expected, she is happy to be a mother. Her family accepted the situation since they had nothing to do with it, and yes, they will continue to raise the child the best they could.