local, news 12:42 AM
A+ A-
Print Email
Due to poverty, some parents or even single parents can't take care of their kids. Some as well are due to being heartbroken after the other half dump her and the baby. Some would be, due to his/her ambition or he/she cannot purchase what he/she wants that is why he/she left the baby somewhere and has no plan of getting the angel back in their arms.

There are many reasons on why a person would leave a baby anywhere such as public places which is very wrong --- such as this newly born cute little angel that was found Wednesday morning in a fast food restaurant in Imus, Cavite. 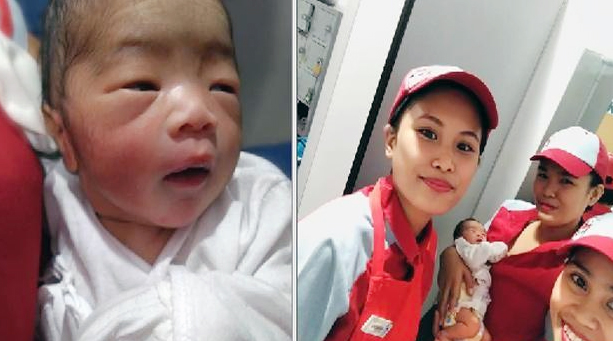 Jessica Tan Verano posted on her Facebook account a photo of Jollibee staff holding the newly born baby and other breastfed the baby.

She stated on the photo that 'whoever left the baby near the Jollibee store in Imus Pag-asa, she'll let God [do His thing/plan for that person/s]'. (Translated from Filipino to English)

She continued on her post that "she is about to cry because the baby was left by the useless parent/s... and the Department of Social Welfare and Development (DSWD) will take the baby".