entertainment 9:48 PM
A+ A-
Print Email
The last quarter of It's Showtime Tawag ng Tanghalan season 2 is done and with the "madlang people's votes" combined with the judges score sent Janine Berdin and Reggie Tortugo to Grand Finals.

Janine, a Visayan contender, got a total of 97.98% which made her the top 1 among the 9 competitors on that semi-finals. Janine gave outstanding performances in the entire week of the competition. Her most memorable performance is the song "Narda" by Kamikazee which she gave her own version of it, making the judge singer-composer actor-host Ogie Alcasid in tears. 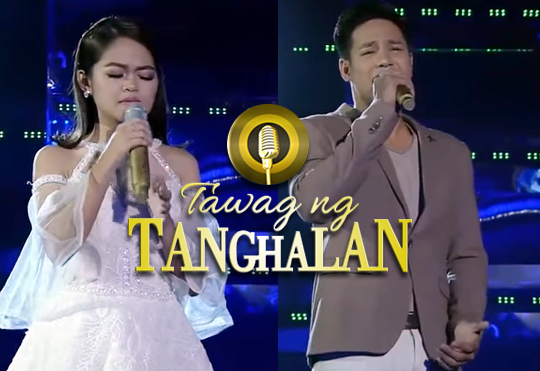 She got a standing ovation as well during her performance of "Banal Na Aso" by Yano.

While, the second place went to a Visayan contender as well, Reggie Tortugo.

Reggie gave amazing ballad & RnB performances and even won a lot of hearts from girls and girls at heart. One of the judges mentioned that Reggie's power is to convey a song to something that says 'just love me' --- something like that, which means he does serenading well.

He got a high pitch voice from a man and could sing a Bruno Mars song and make it his own.

He performed a ballistic performance on the 6th day giving a surprise powerful throw to the audience with his rendition of "Love of My Life" by South Border.

Here is the ranking:

Watch their performances below: