viral 4:17 PM
A+ A-
Print Email
Barangay election is fast approaching. Candidates are now posting their tarps with their faces and names to let the people know that they are running in this year's election, and hoping to get the votes of the many.

Somewhere in the Philippines, in Barangay Patag, an old woman named Yolanda Lariosa was seen by people writing her name at the back of used tarps and posters using a marker and placing it in an area so people can see it---it is letting people know that she is running as Barangay Kagawad (Barangay Councilor) to serve the area. 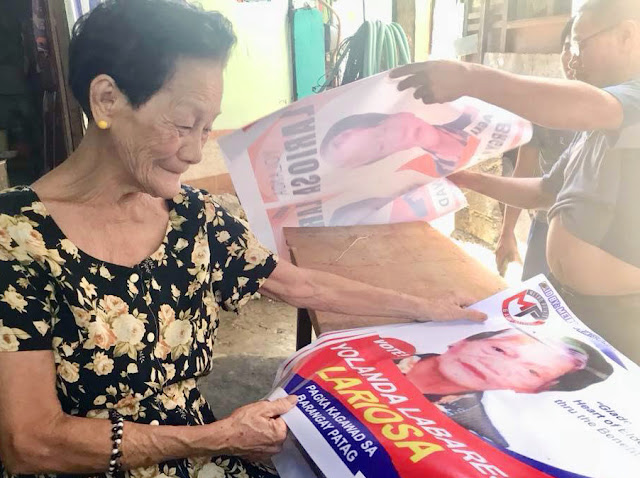 She doesn't have any good amount of money but she wanted to serve. Truly her perseverance to campaign touches the heart of the netizens.

Yes, she received laughs from some people but no one can stop her from achieving her dream to serve her countrymen --- her barangay people.

A Facebook user named Maileen posted images of the 'Yolanda placing [her written] name at the back of used tarps on some [kinda laundry] wires' got a lot of attentions from different online users who are sharing their love and support to the old lady.

Indeed, a lot of netizens were touched by her determination until the images posted reached another Facebook user named Tatap who then had no hesitation to help the old woman in sponsoring her campaign.

She then contacted one of Yolanda's grandchild on Facebook and was able to come up with a great design for the running old woman.

Tatap and the Metro Prints did a good job in producing new tarps for 'Nanay Yolanda'. 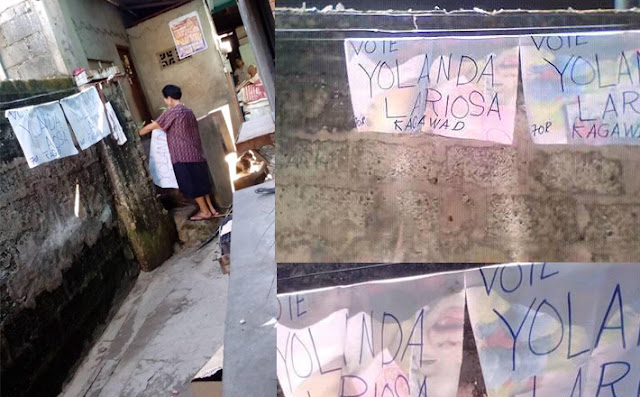 May 9th, around 1 o'clock in the afternoon, Tatap posted on Facebook an image of Nanay Yolanda teary eyed and touched of their great support for her candidacy. She saw her face in large tarps with her name and the position she is running for.

Netizens poured their love by leaving a heart like and warm comments thanking Tatap and Metro Prints for helping Nanay Yolanda on her journey to public service.

It really shows that if you have a good heart, good things will happen to you.
Share to: