entertainment 6:23 PM
A+ A-
Print Email
A Visayas contender, Reggie Tortugo, who sang Maroon 5's "Sugar" just added sweetness and it seems the people and the judges loved it. He won today's competition making it to the Final 6 that will compete on Saturday in Aliw Theater for the main Grand Showdown.

Reggie who was asked by judge Nyoy Volante to let go, danced his way with his song "Sugar", and although he forgot a one-line lyric, he was able to cope with it steadfastly. That moment made the judges proud of him. 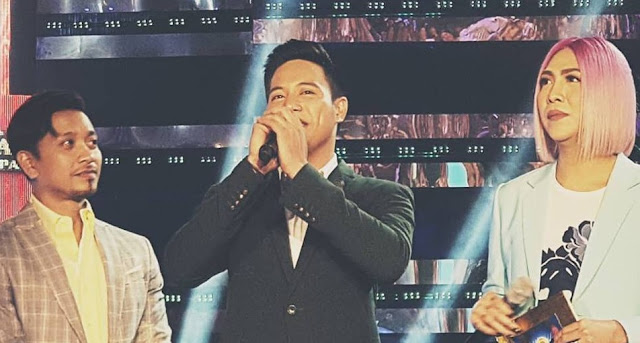 He is not really into dancing as he mentioned that even 'it [dancing] is against his will' --- he would do it to win. But one thing Vice revealed to everyone is Reggie is a shy type person but backstage he was the funniest, and even farted anytime & everywhere based on his co-contenders.

Vice then joked that 'yes, fart before it fades away but if you farted, instead of the fart fading away, it will be the friends around you who will be fading away [from him]'.

Every time Reggie stand up on stage, the funniest moments happen. Just like yesterday wherein Vice was left having no response with his high five --- that moment went viral.

The other contenders who are waiting for their will to win and make it to the final showdown are Arabelle dela Cruz, Sofronio Vasquez, Remy Luntayao, and Steven Paysu. Two spots are left before the final 6 will be completed.

Well, we would like to congratulates Reggie Tortugo, he made it because he is amazing and he really did a good job.