My 2 Mommies hits ₱5.5 million on it's first day

entertainment 7:14 PM
A+ A-
Print Email
The movie under Regal Films "My 2 Mommies" earned ₱5.5 million on it's first day in cinemas.

The movie is directed by, the son of the beloved late comedy king Dolphy, Eric Quizon, and the movie got a Grade A from the Cinema Evaluation Board (CEB). 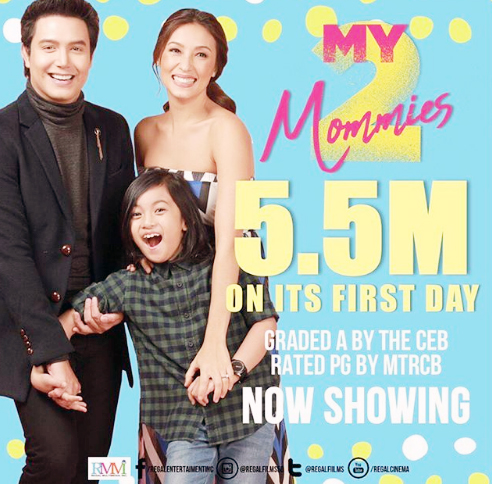 The movie is leaded by Eat Bulaga host Paolo Ballesteros paired with GMA's model-actress Solenn Heussaff. The motion picture formally opened on Wednesday, May 9, in more than 140 silver screens across the country.

Ballesteros who depicts the part of "Mamu," gladly shared the film's prosperity on Instagram.

The plot is around a remarkable family story of an unplanned issue amongst Heussaff and Ballesteros. Both of the characters play as a mother to a similar child. Curve however is that Paolo plays as a gay.

The story is fun as it tells on how having a 3rd sex parent around the child be like, and how would a gay parent explain to his children about his identity as himself.

Some actors that are part of the movie is the Diamond Star, Ms. Maricel Soriano, Joem Bascon, Dianne Medina, Marcus Cabais, and more.

This movie is made for the yearly celebration of Mother's Day which we need to celebrate most of the time since our mother is one of the best people in the world.
Share to: