local, news 8:38 AM
A+ A-
Print Email
President Rodrigo Duterte greeted Mocha Uson thru video a happy birthday and said he is grateful to the assistant secretary of Presidential Communications Operations Office (PCOO) for her service and support in the government under his term.

But before those sweet thank you, the President said that Mocha should not be hiding because it's her birthday, and that she should sacrifice her own money to treat the people in the office. 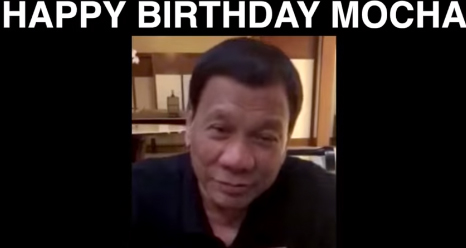 Mocha has been supporting Duterte since 2016 election as she sees the purity of Duterte to help the nation rise from being poor and one of the most corrupted countries.

She also served as a board member in Movie and Television Review and Classification Board (MTRCB) from the 27th of January 2017 until her appointment in PCOO.

At the end of Duterte's video greeting, he said to Mocha "sayang ang ganda mo, alagaan mo (Your beauty is 'aw'... take care of it". Due to being a Visayan speaker, there is no intention of saying aw or "pity" or "waste" with Mocha's beauty in negative way. It is just saying that she should take care of her beauty so it won't go to waste --- which is a compliment.

Mocha posted Duterte's video message on her Facebook account making a joke saying, "I thought you are going to treat me".