entertainment 12:17 PM
A+ A-
Print Email
Lee Ridley, or we known as Lost Voice Guy, advances to Britain's Got Talent (BGT) 12th season's finals after winning the first BGT semi-finals.

As a result of complications of cerebral palsy, Ridley can't speak, but he made his weakness his strongest asset. With a machine helping him relay his message to people, he is able to tell people about his comedy skits. 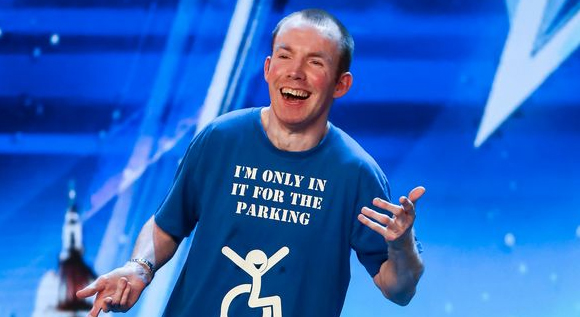 Image from YouTube/Britain's Got Talent

Recently on BGT's semi-finals, Ridley or Lost Voice performed a very powerful comic act that made everyone including the judges stood up from their seats and gave a numerous applause.

He even ended the performance saying the audience are great and even if they are not [great] he can no longer change his words as of the moment (probably since the machine said it already).

During his performance he even said a good joke about YouTube comments being disabled, and he relate it to him as a "disabled guy" --- no awkwardness because he is awesome.

After the performances of the semi-finalists, Lost Voice was named as one of the top 3 acts of that night together with the magician Maddox Dixon, and the vocal group who offered their performance to the great warriors of Britain --- the veterans, the D-Day Darlings.

After a few seconds, Lost Voice was named as the semi-finalist with most votes from the people and is advancing to the finals.

He then gave a message thru his machine that 'he felt even more special than usual', dropping a joke again as a special person due to his disability.

Lost Voice Guy is truly an inspiration to everybody, be thankful for what you have, and use what you have as your strength.

Watch his semi-finals performance below: