viral 7:31 AM
A+ A-
Print Email
Angela Bassett, an American actress and activist, the "Queen Mother of Wakanda" in the hit movie Black Panther came backstage to visit the cast of "Once on This Island"--- that happened after she watched the show in New York.

Lea Salonga who played a part in the musical as Erzulie, a family of Loa --- or spirits in Vodou (Voodoo) --- last year talked to Ms. Bassett about her daughter loving the actress so much as Black Panther's Queen Mother of Wakanda. 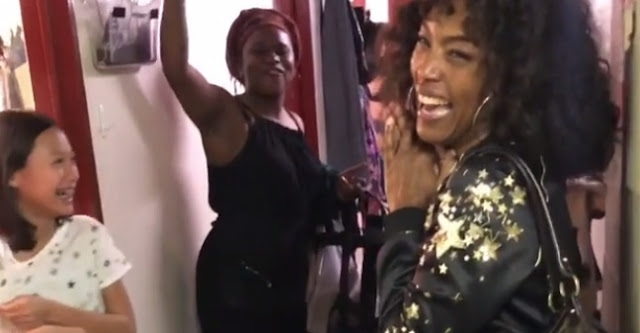 After the short talk, Salonga's daughter, Nicole, came out and knelt in a Wakanda way before Bassett. Everyone was cheering, went so happy for what Nicole did to give respect to the actress.

Bassett then came closer to Nicole and hugged the child giving a kiss on Salonga's daughter's forehead.

Salonga then posted and shared this wonderful meeting on her social media accounts saying that they were honored with the actress' presence and stating about what happened in the backstage.

She then followed the post with a hashtag 'Wakanda Forever'.