entertainment 5:29 PM
A+ A-
Print Email
It's Showtime's Tawag Ng Tanghalan Finals has started, but it may still not be called the Grand Finals since the Finalists need to do an amazing performance to win the judges's score and people's votes. With great "combined scores of judges and people's votes" gives them a chance to be part of the Final 6 that will be advancing to the main Finals of the week, that will be happening on June the 2nd.

The first day had 6 finalists to compete with each other. They are Alfred Relatado of Quarter 1, Remy Luntayao of Quarter 2, Makoto Inoue of Global Quarter, Sofronio Vasquez of Quarter 3, Reggie Tortugo of Quarter 4, and Arabelle dela Cruz of Ultimate Resbak. 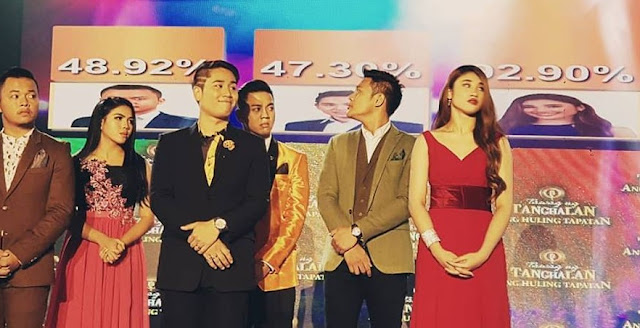 Each of them performed amazingly. Alfred sang a classic Tom Jones song "I'm Coming Home", and judge Rico J Puno said that "Alfred is an exponent of feeling to people".

Remy ever stop singing even her mom was brought laid to the final destination just yesterday, based on Karylle's comment, "it were all just yesterday". She sang her heart out with Shirley Bassey's "The Greatest Performance of My Life". Karylle felt emotional, and felt Remy with her rendition. It seems that Remy was telling her story and that she played her part so well.

The man who worked in Japan for his family went back to his homeland, Makoto. He sang an originally sung song by Dionne Warwick and was revived by Luther Vandross' "A House is not a Home". Punong Hurado Rey Valera commented that "he did great and he is a true ambassador of Filipinos". Everyone was also left in tears especially host Amy Perez after hearing Makoto's son giving a message to his dad.

Sofronio who became an inspiration to overweight people, he did a great performance of Adele's "Skyfall". Erik Santos appreciate his runs, and so on, and even glad to hear Sofronio's version of 'Skyfall'.

Reggie widely accepted the emotions and released it to everyone after singing Journey's "Open Arms". The judges were glad to hear the voice range of Reggie. Punong Hurado Rey said "from slow rock, you made it ballad, risky move, but in this time of competition, it's make it or break it", he was not expecting Reggie, as well, having a high voice and he thought it was just a falsetto. Rey said that he did great in his performance today, and talked about being jealous towards the contender's image that has the voice, has the looks, and has the heights.

The last one to perform was the Ultimate Resbak 2nd placer, Arabelle Dela Cruz, who blown us away with her Ultimate Resbak's performances such as the "Run to You" of Whitney Houston, and "If I Were a Boy" by Beyonce. Today she sang another Whitney song, "Miracle". Judge Yeng said that 'Arabelle really has a star look that even she did not sing, you will see the X Factor that she has'. Yeng added that 'in her performance today, aside from her fighting spirit, Arabelle never let go the meaning of a song, and that is the combination of her performance's power today. She sang with power but at the same time, she had given everyone a message to be inspired. Though it was not perfect, there's a time that she's off but her fighting spirit over-shine it all'.

After their performance, the voting line was opened.

Dulce, a Tawag ng Tanghalan winner --- from different generation, came to perform making the crowd applaud and made the judges stand up from their seats.

After the performance of Dulce and the voting line was closed, the result was given. Alfred, Makoto, and Arabelle were called to step forward. Two of them are in the bottom, and one of them is on the top, while the remaining 3 at the back who were not called are in the middle ranks making them safe with a chance to win a spot on the 2nd of June Grand Finals.

The screen flashed and it was Arabelle who won the top spot. It also means that if someone from tomorrow's batch can't be higher than her total percentage which is 92.90%, she will be advancing to the main Grand Finals this coming Saturday.

The percentages of the contenders are combination of judges' scores and online & text votes.

We don't own the video | Video courtesy from YouTube/ABS-CBN Entertainment --- the owner of the video
Share to: