local, news 9:40 AM
A+ A-
Print Email
President Duterte said he could proclaim war with China over the debate in the West Philippine Sea if his boisterous faultfinders would be set on the forefront of the fight.

The President demanded that he would not forfeit the lives of government troops in a fight that he can't win in the midst of the military development of China in the debated an area. 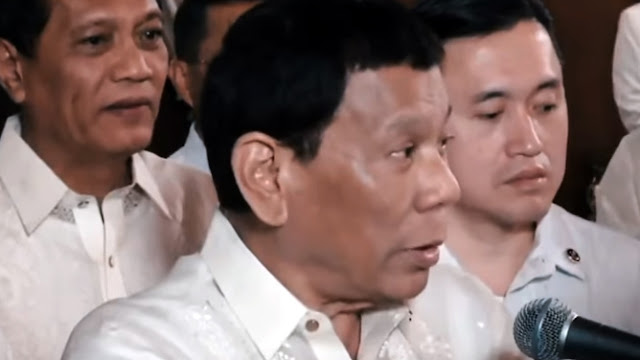 He said in a meeting with correspondents in Malacanang that 'he can proclaim war on China that evening, but who will go there? His soldiers? His policemen? They will all be killed. For what reason will he go to war for a fight that he can't win? That will influence him to look stupid'.

Duterte mentioned that the issue with the territorial dispute with China started on Aquino's term. They won it, why wait for Duterte's term to have it resolved.

He also said that Aquino said only American can resolve it, but American did not go there. [How much more if the Philippines will go there to claim the territory.]

The President then said that he is okay to have war with China as long as his critics --- the noisy ones --- will be placed in front of the battle. He will be at their back and after arriving in the claimed territory he will abandon them. It's dependent upon them, they want a battle anyway.

Duterte is working to fix the Philippines-China relationship which he said Aquino destroyed. He even mentioned that he talked about it with the China's president but the President of China responded that not as of this time because there will be trouble. Duterte doesn't want any trouble, especially for his people, his soldiers, his policemen, and so on. He won't go to war he knows he would be lost. And he is sure 100% about losing to China if wanted war.

China is a large country and one of the richest countries in the world while Philippines is not that great especially when it comes to military equipment as of now.

Now, who would like to risk their life to a battle that you would know winning would be less likely to be on your side.