Duterte among the faces of TIME's strongmen and is on cover

international, news 3:28 AM
A+ A-
Print Email
TIME Magazine to release their May's issue globally this coming 14th of May 2018 and the cover includes the President of the Republic of the Philippines, Rodrigo Duterte --- as one of the four faces of 'strongmen'. 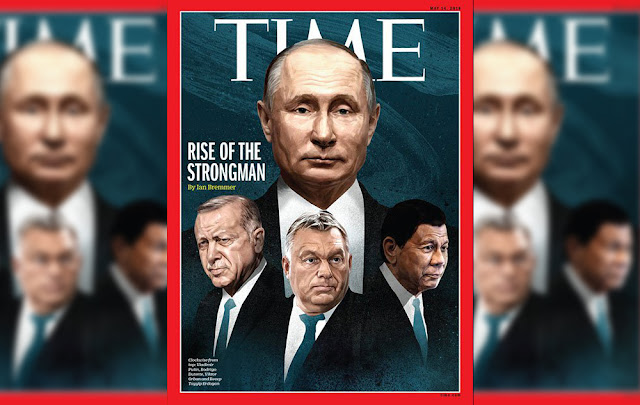 Image from TIME Magazine International Edition May Issue
This image was also shared on Twitter by the writer @ianbremmer saying that 'he did not include Trump
on his Rise of the Strongmen but [Trump] would like to be included'.

The article peruses that "in each locale of the world, changing circumstances have supported open interest for more strong, self-assured authority. These intense talking populists guarantee to ensure 'us' from 'them'. Depending on who's talking, 'them' can mean the degenerate world class or the getting a handle on poor --- nonnatives or individuals from racial, ethnic or religious minorities".

"Or then again backstabbing lawmakers, administrators, financiers or judges. Or then again lying journalists. Out of this separation, another model of pioneer has risen.

We're presently in the strongman period."

It depicted Duterte as "a previous chairman who talked more like a Mob/mafia Boss than a President, on his guarantees to wipe out the 'illegal drug trade' with his own particular image of equity."

The Philippine government has commonly guarded the counter medication crusade --- anti-drug, saying it was not behind announced synopsis killings.

Some say that the killing is due to the government's crusade, where it could be due to cops who could be killed by the suspects and criminals fight to protect their lives. It couldn't be, as well, as we all have the idea that if you join an illegal activity, you then could be a whistle blower, and the heads of the illegal party won't let that happen --- so instead of you being caught by the police, they will haunt you.

What makes the president special is his question to the people who keeps on intriguing him, people who gave him an amount of how many is being killed thru their speculation of 'EJK (Extra-Judicial Killing)'. The president then asked that if those people have the list of the people killed by his way then tell him [the president] who is the 5th person he killed on their list.

The person who intrigues the president simply cannot answer. This could lead us to an answer that 'EJK' may be an speculation. Something the opposition is fighting without a firm evidence.

The president continues to work on different projects from shutting down illegal trades to OFW concerns, from OFW concerns to new infrastructures, and so on. Whatever may this magazine deliver, it is always different when you know someone in person, or even experience to live in the country where this so called "strongmen" live... before saying a thing.
Share to: