Cheng Yong appointed by Duterte as special envoy to China

local, news 3:59 AM
A+ A-
Print Email
President Rodrigo Duterte has delegated Cheng Yong as PH envoy to China to encourage nearer relations amongst Manila and Beijing. It was signed by Duterte on the 23rd of May however it was discharged to the media just on Monday.

Yong will serve for a half year yet his term of office was not shown in his arrangement paper. In July 2016, previous president Fidel Ramos acknowledged the post as uncommon emissary to China. 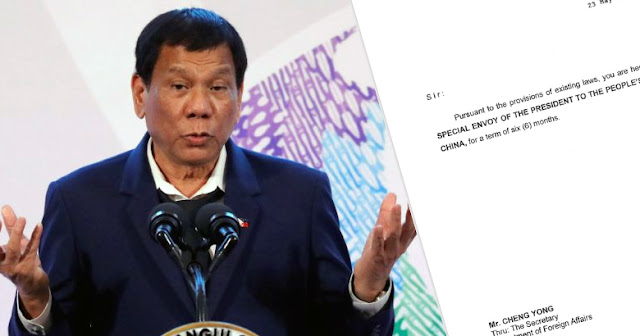 In any case, Ramos surrendered in October 2016, saying he had done his activity 'to break the ice and to help reestablish the ties of altruism and kinship'.

Duterte additionally delegated Amable Aguiluz fifth as his extraordinary agent to the Gulf Cooperation Council. Aguiluz will serve another new term from July 1, 2018 to June 30, 2019.

Miguel Ayala as his exceptional emissary to Australia. Ayala will serve from July 1, 2018 to December 31, 2018.
Share to: