Bruno Mars to Filipino fans "put your smartphones down and dance"

entertainment 1:53 PM
A+ A-
Print Email
The Mall of Asia (MOA) Arena was filled with a joyous vibe as singer-songwriter & a total performer Bruno Mars took the stage with so much finesse last Thursday, the 3rd of May & on Friday, May 4th.

The half Puerto Rican-half Filipino artist is on his 24K Magic tour, and Manila is one of his stops for his amazing concert tour. The concert is sold out, and the crowd is very pleased to see the amazing performances. 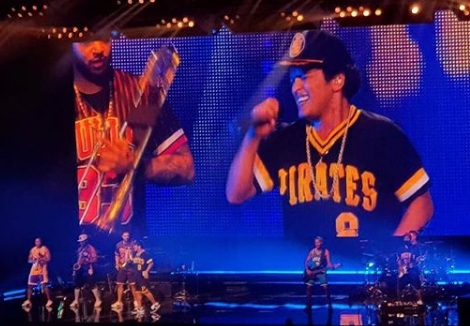 Like who doesn't want to jam? Bruno Mars is an intelligent artist with wonderful songs --- from love to pump' up anthem to make you feel the moment and dance.

He was wearing a blue jersey, but don't expect for a sports show because this guy will give you all the flavor. It is such a contagious fun spreading the arena steadfastly.

Singing his hits in a super performance, opening the show with "Finesse" and closing it with "Just the Way You Are". The crowd was amazed especially when the singer added Filipino words on his songs during some of his performances. "Mahal kita", repeatedly used in a way of singing by the artist and everyone was cheering --- showing amazing support.

A lot of celebrities, as well, went to jam. Kambal Karibal star Carmina Villaroel Legaspi and his husband together with her kids were there to celebrate the luxurious moment.

Comedian Vice Ganda went to jam, Zeus Collins and some of the hashtags' members went to party, Host Luis Manzano with his actress-girlfriend Jessy Mendiola were there to support the amazing performer, even Dr. Vicky Belo who just arrived from Jordan did not miss the wonderful event, and many more celebrities came to have a blast.

Although it was an amazing crowd, Bruno Mars saw most of the people in the audience came to take a video, yet nothing was wrong with that, but yeah he is right, you just need to dance and enjoy the moment.

Bruno Mars was quoted by PEP politely asking the crowd to put down their smartphones to feel the vibe, dance the best out of them, and seize the moment.

The singer said that he'd never seen so many smartphones raised off in his life, making him scared of the crowd not able to dance to take a shot. So he was asking to put down the phones and to start jamming.

Well, nobody could deny that the Grammy award winning artist is an elite entertainer. A guy who can drive even a gazillion people to jam and have some outstanding fun.
Share to: