entertainment, news 7:17 AM
A+ A-
Print Email
Barbie Imperial, the leading lady of JM de Guzman on a hit television series "Precious Hearts Romances Presents: Araw Gabi"(Day and Night), almost got a kiss on her lips from of course her leading man, JM.

The chemistry of both of them is delightful and offers too much romantic excitements. Some fans of the show and their love team don't know what happens behind the scenes. 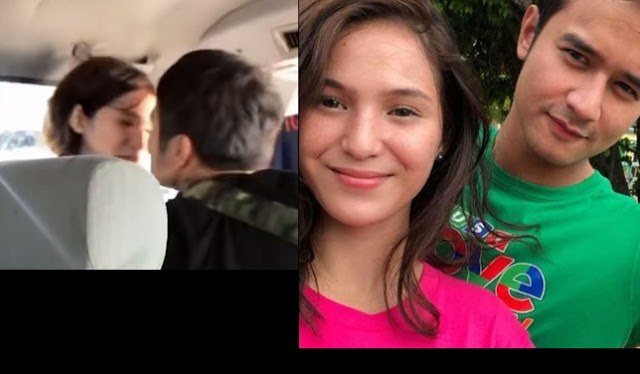 A video inside a vehicle came out saying that JM and Barbie are having some fight & gigs moment --- probably there is a jealous moment that made them have a little conflict.

JM just sang a song, strummed his guitar, and faced the video camera with a sad face, while Barbie at the back was smiling, putting her tongue out, and like she was doing it to irritate her leading man.

The both of them had a talked again and Barbie said in front of the video camera recording them that 'if a person made a mistake, he makes something to put the blame on you'. The man recording the love team asked who was Barbie referring to --- although he knew whom Barbie meant. Barbie then pointed JM at JM's back.

JM then faced Barbie and Barbie made a wacky face to irritate the handsome actor. "Pabebe ka (You're acting like a child)", said JM to his leading lady. Barbie response, "[Eh]di kung pabebe [ako]. Wag mo akong tinatawag na pabebe (What now if I'm acting like a child. Don't call me childish)". Barbie continued wackying to irritate JM until JM gave him a smack kiss.

The kiss did not hit Barbie's lips though because Barbie was able to dodge it.

Many netizens are getting romantic excitements from that moment, and someone said that Barbie did great in avoiding the kiss, but what if the kiss hit Barbie's lips... we will be gone crazier.