Ato Arman defended his seat of power from Boyet Onte

Which means the not chosen two will be advancing to the final round while the two chosen need to prove they are deserving by winning against each other, and replace someone in a seat of power.

Boyet did not expect his co-quarter contender will pick him, making his life at risk to advance to the final round of the competition, but some believed that this is a strategy since Arabelle picked her co-quarter contender as well, making it fair and avoiding the two potentially strongest competitors to compete today --- for them (Ato and Arabelle) to get a chance to move to the final round.

Mark Michael Garcia is ranked 2nd in text votes and judges scores as revealed on the second day of the Resbak competition, while Aljun Alborme, although he was not able to rank as part of the top 10 with the judges scores during the first day he performed in Ultimate Resbak, there is something in him that is very likable and that made him placed at the 3rd spot of the people's votes --- revealed on the same day with Mark. 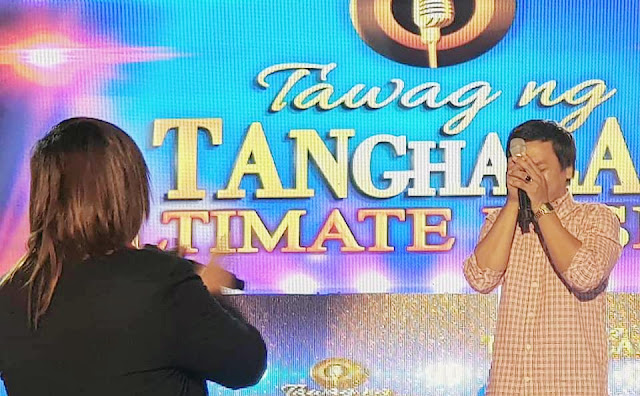 That might be the factors on why the seat of power owners picked Boyet and Christian to compete today.

Christian who sung Rascal Flatts "Bless the Broken Road" ended his journey after losing to Boyet's version of "Still Loving You" by Scorpion --- judges picked Boyet over Christian that time and based on the judges comments saying they picked that someone who entertained them, it must be Boyet since he did able to give moves while singing.

After the elimination of Christian, Boyet has now the chance to pick anyone of those seat of power owners.

Boyet then stated that he would not want to fight someone whom he knows not a match for him, probably based on his voice, genre, and experience. He would like to select the person who is a perfect match for him, and as well a person who picked him to sing today. That is why Boyet picked Ato.

It was a neck to neck battle which in the end, the scores from combined 'text & online' votes and judges scores were in favor of Ato Arman's performance.

See the amazing performances below: