viral 5:19 AM
A+ A-
Print Email
Vice Ganda is not yet appearing on It's Showtime due to his 'Pusuan mo si Vice Ganda' concert tour, and this time he will be performing in Canada.

On his flight going to Canada, a little boy approached Vice in the plane and gave some chocolate sticks. Amid that time, the Kapamilya star was going to North America to perform for his show visit "Pusuan mo si Vice Ganda." 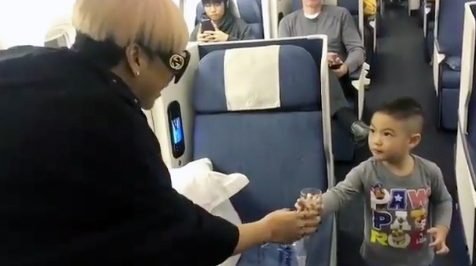 The video of the young man's sweet signal to the comic was transferred by a fan. It appeared as though Vice was extremely touched by the kid's basic yet enchanting consideration.

Vice took a bit of chocolate stick and stated that "I'll simply have one bless your heart. You're so sweet".

Then he asked the little boy who was most likely around 3 to 4 years old, where his mother was and the young man looked behind and pointed towards where his mom was situated.

The [It's] Showtime host have expressed gratitude toward the young man and instructed him to backpedal to his mother.

Netizens appear to have been touched too by the kid who imparted his sweets to the unkabogable star.

The scene was captured by a video and posted on Instagram. Everyone is so amazed of the happenings.

We hope that all kids would do the same to everyone, you may be a VIP or not, kids should be giving and loving, who should enjoy to give without asking anything in return.

Credits to the parents who raise their kids well.