local, news 9:29 AM
A+ A-
Print Email
An online post by Kriz Angelic Mi went trendy after she posted a very sad incident in her life.

She was riding a ship going to Manila with her husband and her baby. They were very happy to travel that time together until an incident happened. 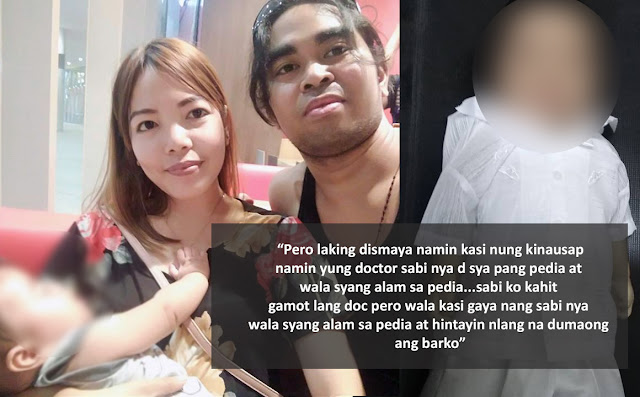 Her baby was acting strange --- the baby kept on vomiting, and when she fed the baby, the baby kept pooping (probably diarrhea). Without any doubt they rushed to the ship's clinic but after meeting the doctor, the doctor didn't do any action or even went near to check the baby, instead the doctor just said he/she has no idea about babies because she is not a pediatrician.

They asked any thing she can do that would help their baby but the doctor would not do anything about it. The doctor even said to wait until the ship arrives to its destination.

So, they went back to their room with hopes that their baby is gonna be alright. They just knew that the ship will be arriving in Manila at 7 in the evening, and the incident started around 7 in the morning.

When they got back to their room, their baby can't sleep and still pooping. They did everything they could but the baby is still unease. Her husband went outside their room carrying their baby to see if the baby will feel better but the baby vomited again.

They ran again back to the clinic even they knew that the doctor can't do anything about it, since they believed that that person is a doctor, he/she should have a lil bit of knowledge about the issue their baby was experiencing. The doctor didn't even tried to get the baby's body temperature.

They felt sad as well that there is no first aid kit in there, and so their baby was still not well that time.

They went back to their room but the baby was still not doing good, and a few minutes they found that their baby's eyes looked deeper. Having no choice, they ran back to the clinic but they were not able to see the doctor.

After 4 times of coming back and forth, they've found the doctor in the ship's salon having a foot spa. As they went in, the salon employees were shocked to see the baby looked so pale, so the employees went to assist them by putting Manzanilla oil to their baby and a bit of massage.

While, the doctor that time didn't pay attention and was just checking her phone.

The baby went a bit okay, so they went back to their room.

But the struggle was still ongoing, their baby can't sleep and still vomiting and pooping. They were panicking to see their baby so pale and the eye-bags were so black.

The baby was weak that time as they ran back to the clinic and that was around 3pm. At around 4pm, a nurse came in assisting them, sad to know that there is a nurse in the ship and the doctor didn't try to call it for an assistance earlier.

Their baby as Kriz said in the post was dehydrated that moment.

The doctor just helped after she saw that their baby was struggling in breathing. The nurse was even the one who told the doctor what things are needed to save the baby.

Sadly at 6pm, their baby passed away. Their baby was a fighter because even their baby kept on vomiting and pooping, the baby was still drinking milk from her.

Kriz is asking for justice to her child. It's not easy to lose someone especially when it is your child.

If there was just an early assistance, and first aid kit, this ending would have been neglected.
Share to: