She is back and will be working on a film

entertainment 10:22 PM
A+ A-
Print Email
Almost 2 years away from her long-time home network, ABS-CBN. She is back for a movie under Star Cinema.

It's Kris Aquino back on track! 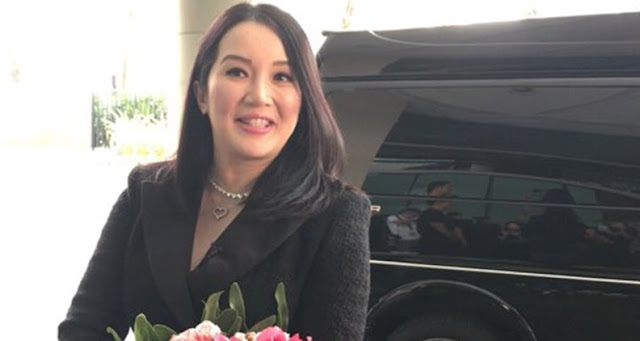 Kris Aquino came in to contract signing with Star Cinema. Image from ABS-CBN

She said in an interview with ABS-CBN news on Friday that she feels so good. She was asked if she's ready and she replied with a question if they are ready. She feels good and it's been 2 years.

Kris who's known as Queen of All Media will be part of a JoshLia (Joshua Garcia and Julie Barretto) movie titled "I Love You Hater".

The film will be directed by Giselle Andres and might be released on June 13th.

She was asked on why she accepted the project. Kris mentioned the amazing tandem of Joshua and Julia.

She said that both of them (Joshua & Julia) have on-screen magic, asking the two to take care of it.

The love team made her decide to take the role -- actors who fit on this movie's role. She also mentioned Daniel Padilla and Kathryn Bernardo, which she said DJ and Kath are so established.

Kris can't imagine the KathNiel to be apprentices. Same view with Enrique Gil and Liza Soberano. So Joshua and Julia are perfect.

Joshua is an idol of her sisters. They have watched him in the series "The Good Son", and they are so happy to know that Kris will get the chance in working with him.

She added that her sisters find Joshua a great actor.

Another factor that made Kris yes to the film is the film director Andres, an apprentice of her dream film maker, Olivia Lamasan.

Kris loves all Olive's films for almost 8 years that she had watched those. She added that it is really easy to make her say yes.

It might not be possible to work with Direk Olivia, but this is the closest she can come to it, she also mentioned.

It was September of 2016, Kris left the network and had 2 movies before leaving. These were "Etiquette for Mistresses", and "All You Need is Pag-ibig" which were released by Star Cinema last 2015.

She signed with APT Entertainment after she left ABS-CBN.

"When Star Cinema offered me, we had just closed the agreement with Cornerstone to manage her. It was a big erase that happened-- making life easy", she said. "I believe everything happens for a reason", she mentioned.

As per the report we got, Kris just signed a contract involving this rom-com film project with Star Cinema.
Share to: