Maris Racal was surprised of what Yves Flores did to her

entertainment 7:55 PM
A+ A-
Print Email
The casts of the top-rated TV drama in the afternoon "Hanggang Saan" (Until When -- ABS-CBN) held a finale press conference attended by some of the main actors, Sylvia Sanchez, Arjo Atayde, Ariel Rivera, Yves Flores, and Maris Racal.

Maris was answering interviews by that time when someone found a wardrobe malfunction on her's clothing. 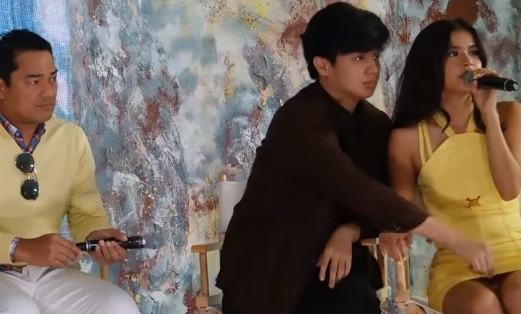 Gladly, her love interest in the show, Yves, helped her by trying to pull the cloth a bit down to cover her important area. It didn't work well but Maris was able to catch the point and she covered her lower area with her hands and/or by closing her legs.

Yves didn't stop to help because he asked somebody to bring a piece of cloth such as handkerchief or towel to totally cover the undergarment's area.

Although Maris experience some kind of a public wardrobe malfunction, she was able to handle it professionally. Stars are human as well and they could make some mistakes, on purpose and/or unintentionally.

The downside of helping Maris for Yves was Yves was judged by some interviewers of not paying attention to the interview, but it was a sweet move from this young boy to show care to a woman especially when a woman needs protection from public eyes.

Yves and Maris rose to fame from being housemates on a reality TV Show, Big Brother (Philippine version).

Yves started on 2012, he was not able to make it on the Big Night but his star continues to spark.

Maris on the other hand joined Pinoy Big Brother on 2014, she made it to the Big Night and finished 2nd place or 1st runner-up.

Both of them got an amazing journey in Entertainment Industry, making a lot of appearance on TV, Meet-ups, and even Big Screens.

Hanggang Saan will soon to end this month, this is the latest show both of the young actors being part of.
Share to: