entertainment 5:06 AM
A+ A-
Print Email
The Teen King is now growing as a romantic king who always catches the heart of the girls, this is all because he is handsome, amazing charisma, great acting skills, sexy voice, and more.

There is no wonder on why Daniel Padilla (DJ) is a very famous celebrity in his generation. 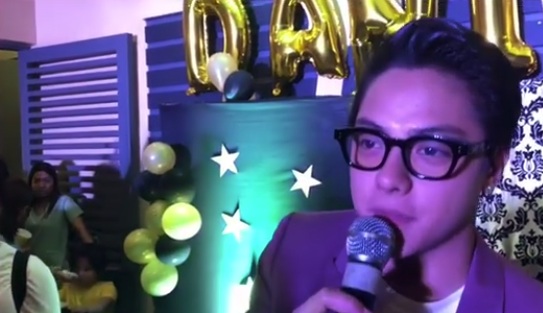 Daniel Padilla on his 2018 birthday celebration | Image from Instagram @mor1019jhaiho

Last April 26, DJ celebrated his birthday and it was star-studded. His father came to join the party together with his uncle, Robin Padilla who's with his wife Mariel Rodriguez.

The party will not be completed without DJ's loved ones, and of course the Teen Queen Ms. Kathryn Bernardo.

The party was held in Quezon City --- organized by his ultimate loyal fans.

DJ said that he is so thankful for the time and effort everyone has given and it's not that easy. They appreciate the love being received so much. And he wished that many many more time that we'll can all spend together.

"Hopefully that you will support all my decisions. This is the beginning of these years of change", he added.

DJ did not blow one candle alone since there is another cake to blow being delivered in front of the actor.

This birthday guy grew up as a great man. Well respected icon, friendly attitude, funny sides, and most of all loving. He also has a heart of giving, since he helped a lot of in need.

Daniel is an actor of ABS-CBN and currently he's being team up with Kathryn since the show 'Growing Up'. He will also have an upcoming movie project which will be a reunion movie of the love team, themselves, with Direk Cathy Garcia-Molina.

The three worked together on a few episodes of 'La Luna Sangre', and a box office hit movie, 'She's Dating a Gangster'.
Share to: