Suspect in Joanna Demafelis' death in Kuwait detained in Lebanon

international 7:39 PM
A+ A-
Print Email
According to the DFA (Philippine Department of Foreign Affairs), one suspect in the killing of a Filipina domestic helper in Kuwait has been detained in Lebanon after the arrest.

It is said that one of the suspects is Nader Essam Assaf, a Lebanese, was taken out and arrested in his home country for the crime of killing Joanna Demafelis, the Philippine foreign affairs secretary, Alan Cayetano said in a statement.

The secretary also said that President Duterte received the news of the arrest and hoping Kuwaiti authorities would take his request which is the repatriation of Assaf for trial in Kuwait.

"We are grateful to our friends in Lebanon and Kuwait in assisting us with our journey for justice, although Assaf's arrest is a crucial first procedure."

The second suspect in the crime is still nowhere to be found. 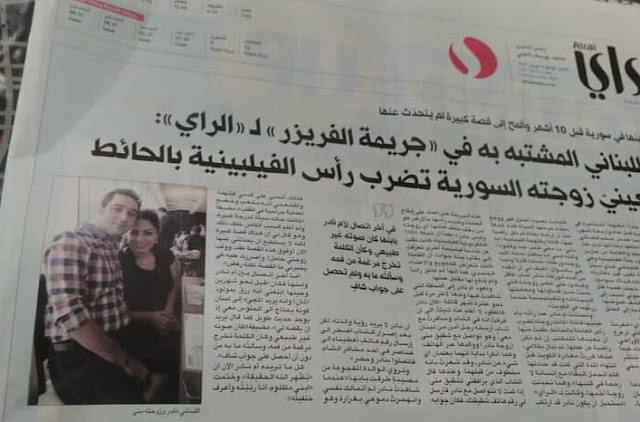 In September 2016, Demafelis was missing and her remains were found in a freezer in an empty apartment in Kuwait later.

She went home last 2014 in hoping to get enough amount to assist her family.

In the statement informed by the Philippines ambassador in Kuwait, senior Kuwaiti security official informed them in the said arrest.

Kuwait's ambassador to the Philippines, Mousaed Al Thwaikh, assured the Philippine government that his homeland will do everything they could to catch the suspects.

Assaf and Mona, his wife who is a Syrian national, are accused of murdering Demafelis - 29 year old.

Mona is still wanted and possibly in the location of her homeland, Syria.

They left Kuwait after Demafelis' death based on reports.

Later, a manhunt launched by Interpol to find the two suspects.

The death of the Filipina maid motivated the Philippine president to order the non-allowed travel for more Filipino workers in Kuwait, making it a diplomatic crisis.

Duterte is in to find justice for Demafelis and other overseas Filipino workers being hurt by their employers.

He also sent an aeroplane to Kuwait to take back all Filipino domestic workers who wanted to return home, the Philippines.

Duterte had implicated what he viewed as a structure of overseas Filipino workers being mistreated abroad.

The ban had chastised by Kuwaiti officials, telling the President Duterte's assertions have only made to complicate the happenings further.

The government of the Philippines later cleared that workers with papers already in place can still go home to Philippines.

A deputation of Filipino officials went to Kuwait to discuss the issue with their Kuwaiti coequal last Thursday.