international, news 5:18 PM
A+ A-
Print Email
Another Filipino hits the stage of Asia's Got Talent to impress the world, and of course, the judges.

Gerphil G. Flores, who has a screen name in the Pilipinas Got Talent "Fame", impresses judges by her rendition of Andy Williams' "Speak Slowly, Love". Her performance with a taste of classic has made David Foster, one of the judges", pressed his golden buzzer.

Golden buzzer means an assurance of performing to Marina Bay Sands, Singapore for the semi-finals of the show.

When Flores came in to perform, she looked very nervous but when she started to open her mouth and sing, everything changes. Melanie C said that she never seen any inch of nervousness on the performance. Van Ness and Anggun were impressed, too.

Foster talked about the perfection of her pitch, and when it's time for voting, Melanie, Van Ness, and Anggun voted yes. Foster was supposed to vote but the people started yelling, "push that gold". After some time, Foster decided to pressed his golden buzzer. 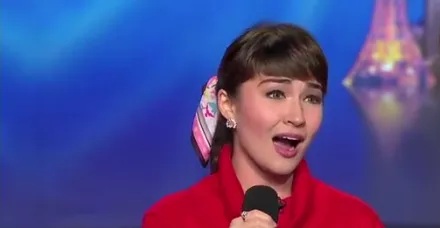 Update: Flores was able to advance to the Grand Finals where she performed the song "Impossible Dream" by Mitch Leigh.

Her performance is stunning, taking big notes and even brought the song to a higher level.

Once again, a standing ovation was given to Flores with compliments from the judges.

In the finale, Flores, David Foster's golden buzzer, finished third. The second was won by a Mongolian band, Khusugtun, who has great vocals featuring nature and vibes.

Winner of the season was from Philippines, a group of silhouette dancers who performed a dramatic real act using shadows, El Gamma Penumbra.

See Flores's performance on how she made Foster used his one and only golden buzzer.